If you have trouble viewing this video click here: http://youtu.be/S8iq6iFociM

Happy New Year! 2014 was easily the craziest year of our lives which saw us traveling to destinations in Asia, Europe, the Middle East, Australia and North America. If that wasn’t enough, we ended up getting married and going back to school in Kingston, Ontario, Canada. This year promises to be just as heavily skewed towards travel as we already have plans for Las Vegas, Ottawa, Quebec City, Lima and South Africa before we wrap up school in May. After we’ve finished our degrees we plan to then head to Europe on an indefinite journey. How about you guys? What are your travel/life plans for 2015? Please let us know in the comment section below.

So Happy New Year! It’s actually January 5th today so we are a little bit late making this video but we still wanted to take the opportunity to wish you guys a Happy New Year and we hope that you enjoyed the holidays.

So we didn’t do a whole lot over the holidays. We just stayed at home, we drank a lot of wine, we ate a lot of food. The only reason I didn’t gain about ten pounds is that I exercised about two hours a day – not to lose weight but just so that I could eat more. Pure gluttony over here.

To give you a little update of what our plans for the rest of the year. We do still have four more months of school left so we need to get through that but unlike last semester we are planning to do quite a bit more travel. We really miss doing that so we’re going to try and make it a priority. To be honest we were really dull over those last four months. We really didn’t do much, we didn’t make travel a priority, we let school and work takeover and that is not going to happen this year. We’ll strike a balance. Exactly.

So first up is Las Vegas! Woo! You know what, I’ve never been to Las Vegas. You were there what one time before. I went there with family when I was a kid so I think going as adults is going to be a little bit different. I think it is going to be a lot of fun and I’m looking forward to it. Let’s not max out our credit cards gambling.

Quebec City! So we went to Quebec City this summer and we had an amazing time. It was one of our favorite destinations of I guess 2014 which is last year. And now we’re hoping to return for Carnaval. It is an event that is held annually and it something I’ve wanted to do for years. It is the biggest winter party in Canada. And how often are we in Canada? Not very often, so let’s embrace winter and let’s go to the biggest party.

Peru! This is the one destination but we have been hinting at for a while. Like we mentioned before, as part of our program we have to do an International component where we teach overseas and we chose Peru because I have family living in Lima so we have a place to stay and it is just a really fun country to travel in. We’ll be heading there for a month in March.

The last time I was in Peru, in 2010, I visited quite a few places like Cuzco, Huacachina, Ica but I just passed through Lima so this time I’m actually going to properly explore it and if we have time I think we’re going to make a city guide.

And last but not least we are going to South Africa! And this trip was a complete and total surprise. I mean, I can’t remember exactly how we found out about this deal; was it you that found it online? On Facebook. So we woke up on Christmas morning and people had posted an amazing deal to South Africa, so we ended up paying $320 per person to fly from New York City to South Africa. How crazy is that? And that includes tax. This is literally, and we’ve had some really good airline deals over the years; we’re always on the hunt for really cheap prices. But this is by far the best. By far. And so we’re going to Africa for the first time and we couldn’t be more excited about it.

We’re going to be going in May once we finish classes and this is basically our graduation gift to ourselves. High five! And we still have got four months of school to go.

That is the little update for our plans for early 2015. Let us know what you guys are going to be up to for the rest of the year and just leave us a comment in the box below. 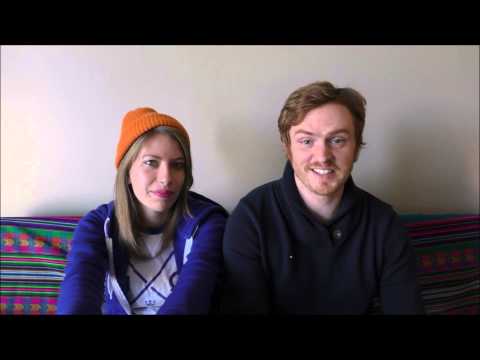