If you have trouble viewing this video click here: http://youtu.be/h6UvRUOZkbw

Shortly after arriving in Milan we kept hearing from locals and other tourists about this thing called Aperitivo. Every night between 6 and 10 pm select cocktail bars in Milan open their doors with a buffet spread of pizza, pastas, salads, olives, cheese, deli meats, finger food and desserts along with offering a host of cocktails, spirits, beers and wines. For a set price (usually around 10 Euros and upwards) you can order a drink of your choice and chow down on a nice selection of food. Unfortunately, it took us until our final night in Milan to finally try Aperitivo and it didn’t take us long to find out what all the fuss was about. Come join us in this video as we showcase what make Mianese Aperitivo so famous.

So we’ve gone out for our first Italian Aperitivo. Which is kind of like a pre-dinner drinking tradition. Basically, you get yourself a cocktail for about 10 Euros and that gives you access to this massive buffet of like pizzas, pastas, olives. Anything you could possibly imagine. And this is what comes before dinner.

So I have to admit I was expecting very simple food for the Aperitivo. I thought maybe they would just give us some prosciutto cheese and olives. You know, pretty cheap simple food. But instead what we’ve found was this. So I’ve got lasagna, I’ve got ravioli. I have have stir-fried veggies. And even french fries which are not Italian but I had to grab a few anyways since they were available.

So how about you? What did you get for the Aperitivo? Give us a tour. Well, basically I almost exactly the same as you. The main difference being I got a huge slice of pizza and I think I got some more cold cuts and cheese.

You know what? All the pizza was gone when I went up there. I think you took the last slice. What can I say.

Alright, so I’m having a Bellini which is made with peach juice and something else. But I can’t tell you what that something else is because I just don’t know my cocktails very well.

And it appears you’ve gone for something a bit more tropical. Yeah, how can you go wrong with a classic Piña colada. Now this looks really thick. I’m hoping that they put a lot of coconut and not too much pineapple juice.

That’s a pretty decent blend. Yeah. Yeah, I really taste the coconut. I like it.

So the savory part is over. What have we got now? Well, it was time for dessert so I went back for seconds and they had lots of different cakes. And then this is really good. I’m not entirely sure what it is but it tastes a bit like a vanilla pudding crossed with custard. I don’t know my Italian desserts but I can tell you it is really good. So I’m not going to share.

Okay, so final thoughts on your first Aperitivo experience. How was it?

Well, considering we spent several nights in Milan I can’t believe it took us to our final night to actually go and try it. We should have been doing this every night. It’s fantastic. You get a really nice cocktail. You get a nice spread of food and dessert too for 10 Euros. It’s fantastic value.

And what did you think of it? Honestly, for me that was enough for dinner. It was a lot of food. I mean it is an open buffet so technically you can go up as many times as you want but you don’t want to be overdoing it. Kind of like Vegas buffet style where you’re just slapping the food on your plate until you’ve got a big mountain. That’s not how it works over here. But it was really good, really tasty food. I would also recommend coming early. Aperitivo is usually between six and ten PM. We showed up at like six thirty and it was already quite packed so come early, get a table and there will be more food options as well. 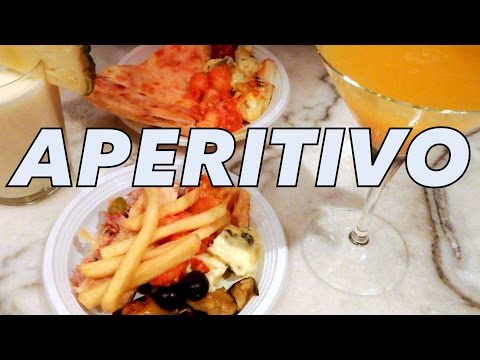