Just for fun we decided while traveling in Australia that we’d like to try eating Australian snacks and Australian junk food reacting to it for the first time – in the form of a taste test – from our apartment (#Room753) here in the Gold Coast.

We decided to key in mostly on Australian chocolate bars, beverages and crisps. All of the food items we were trying for the first time.

Some of the thinks we tried tasting included as follows:

Overall, we liked most of the Australian food we tried; however, certain items such as Fantales and Chicos were not immediate hits with our taste buds.

What we liked the most most were Chokito, Cherry Ripe, Lamington and Shapes crackers.

Hopefully, this travel food video will give you some great ideas for Australian snacks and Australian junk food to try while sampling various forms of Australian cuisine. Please let us know which Australian food items you enjoyed (and disliked) the most in the comments section below.

We are in Australia at the moment and that means lots of new snacks to try.

Today we went to the supermarket and stocked up on some nice little treats. We’re going to be sampling these today and telling you what they taste like.

It appears most of these items are heavily skewed towards sweets and junk food, but that is not a problem for me.

So first up we are going to be trying Shapes (Arnott’s). These look like some savory crackers and they come in the shape of Australia.

Here we have Australia in cracker form and we are actually here on the east coast in Queensland.

It tastes like a pizza cracker. It is nice and salty. I could munch on these while watching a movie.

Well, first up for me is Freckles. Because I don’t have enough on my arm as it is.

This is choc buds with hundreds and thousands of freckles. Let’s give it a go.

It is chocolate-y and crunchy. It is kind of strange. It is like these things are exploding in my mouth but it does taste good. It has a very chocolate-y taste. Yeah, thumbs up from me.

Next up is a classic. This is Tim Tam original and the package says the most irresistible chocolate biscuit.

Here is my first chocolate Tim Tam. I already like the smell of it.

Okay. It is like a chocolate cookie with a nice creamy chocolate filling in the middle and it is covered in chocolate. I can’t complain. That is a lot of chocolate-y goodness.

We’ve got Bowen Mango Macadamias. These are chocolate covered macadamias with mango flavor.

We actually went to Bowen and it is the home of the biggest artificial mango I have ever seen. It was just this massive mango structure. Bowen is known for its mangoes, so let’s give this a try. It looks pretty big. I’m going to eat the whole thing.

Wow. I’ll tell you what. I love mangoes. I love chocolate and I love macadamia. This is really good.

I’m not sure how this is pronounced. I think it is Fantales maybe. Honestly, I’m not so sure I’m going to like it just based on the look of the package but we’ll see.

It looks like chocolate. Oh my. Okay, it is very chewy. Very very chewy. It is getting stuck on my teeth. This actually reminds me of the kind of candy that your Grandmother would have in her purse. So I don’t like it. Hahaha.

Okay, next up we’ve got some weird looking candy here: Chicos. I don’t really know what is going on but it’ll be interesting to try these.

These are pretty bizarre. They look like naked little babies. I’m going to be gobbling up one of these.

It is really chewy. That’s not good at all. I think it is trying to be chocolate-y but it is just so artificially flavored. No thanks.

Next up is Lamington. This is a soft sponge cake that is coated in rich chocolate.

Coconut-y. Okay. This is a pleasant surprise. Honestly, in the supermarket we could only find the Weight Watchers variety so I thought it was going to be a little bit bland and not very sweet. But it is actually a nice cake. It is very soft and very spongy. It has a thin layer of chocolate, so it is not overwhelming and I really like the shredded coconut over top.

This would be nice with a cup of tea.

Chokito. Chokito. Fifty five grams of chewy caramel, fudge, crunchy balls and loads of chocolate. I think I’m going to like this one.

Ooh, it is kind of shaped like an O’Henry bar.

Oh, I can taste all of that caramel and fudge. This is a really really good chocolate bar. This would do well in Canada and US.

Next up I’m having a bar called Violet Crumble. I really like the tagline on this. I says, “It’s the way it shatters that matters.” I think it is going to be really crunchy.

I’m not sure what the filling is. It looks dry. Like a dry sponge.

It is like coffee meringue. This is surprising. Or maybe really crunchy caramel mixed in with meringue.

I’m kind of confused about this one but it is super sugary and sweet so I do like it.

Next up is Cherry Ripe – the big cherry taste. I just had a friend on twitter tell me that I’m going to get addicted to this, so I better watch out.

Alright, I think I’m ready for the big cherry flavor.

It taste coconut-y too but you can really taste the cherries. I think my friend is right. I better not have too many of these or I may get addicted.

Okay, so here we have a Mint Pattie and again it looks like we accidentally picked out the diet variety. It says 50% less fat. We’ll see what it is like.

Okay. It doesn’t have a very strong peppermint flavor. It is more like a hint of it. The filling is also a little bit chewy. Yep, I do like it. I’m giving it the thumbs up.

These are Anzac biscuits. We were just around Australia for Anzac day. This will be interesting to try as well.

These smell good. They smell very buttery. Oh wow. That is a lot crunchier than I thought they’d be.

That is a nice cookie. It is very rich and as expected also very buttery.

This is Kirk’s Originals. We’ve actually been seeing this brand a lot here in Australia. I’m going to be sampling the Ginger Beer. It is called Olde Stoney and it says Australian made since 1865.

Alright, so this is already smelling like medicine. It has a really strong ginger flavor and it doesn’t really smell artificial. This seems like the real stuff.

Sam wants me to chug it like a man, so I’ll do my best.

It has a strong aftertaste. You don’t really taste the ginger at first but once you swallow it is like the ginger is here.

I don’t know. I’m not convinced yet. It probably wouldn’t be my first choice for a beverage. Let’s leave it at that.

Bundaberg. Another kind of ginger beer. And we’ve become so famous in Australia that look – our photos are on the cover. Hahaha. Yeah, right.

We’ve staying in Pepper’s Hotel in Broad Beach, which is located in the Gold Coast. And to surprise us they gave us these beverages with our faces on them. I think I’m almost obligated to like this here.

You’re guzzling that. Gingery gingery goodness. I love anything with ginger. Yeah, this is something I would actually endorse this.

Overall, this was a really pleasant surprise that I liked – I don’t know – over 90% of the things I tried. My favorite being the Chokito bar followed by the Cherry Ripe bar, which is hardly a surprise because I really have a sweet tooth. The only thing I really didn’t like were these Chicos. They were not tasty.

Okay, so for my favorites I’m going with the Shapes crackers. I thought these were really tasty and really flavorful. Kind of like pizza. Yeah, a nice snack. And I also really enjoyed the Lamingtons. They were a pleasant surprise. I was expecting them to be a little bit bland so these were nice. I like shredded coconut so it was a good combo.

If you ever find yourself in Australia now you have some ideas of treats you can try. These can easily be found in a local supermarket and they don’t cost very much. So enjoy! 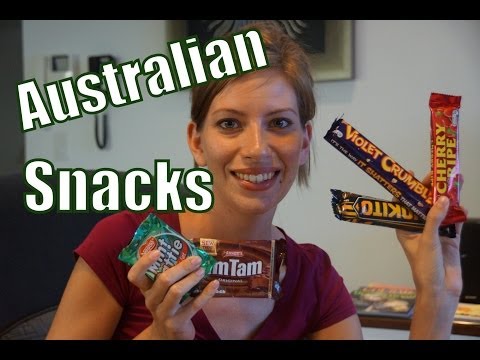