If you have trouble viewing this video click here: http://youtu.be/T0UsvXvgA74

How could you not try a Belgian waffle while visiting Belgium?

Well, as we found out in Bruges there is actually no such thing as a Belgian waffle; it’s entirely a North American ‘term’ given to differentiate between the types of waffles typically eaten back home. Within Belgium itself it is just purely a waffle.

What makes Belgian waffles different from American waffles? Typically they’re larger with lighter batter and larger squares with a grid pattern forming deep pockets. Anyhow, they’re delicious and you can have all kinds of different toppings and creams slathered on top.

Whether you’re having one for breakfast, lunch, dinner or merely as a snack, be sure to grab one when in Brugge.

Waffles! Waffles! We are having waffles!

Well, considering today is our last full day in Belgium we couldn’t leave the country without trying at least one Belgian waffle.

And to prove its authenticity it even has a Belgian flag. Why don’t you take out that flag and wave it. Come on, go wave it.

Sure, in North America we call them Belgium waffles but here they are just regular old waffles.

And that is only because we have crappy waffles. Yes, we have to put them in the toaster. We usually buy them from the frozen section in Canada.

But anyway, what sets these waffles apart is that they are a lot larger, a lot fluffier and the squares are a lot bigger than your average waffles that you buy from the frozen section back in North America. So let’s dig in before this starts melting.

First bite. Okay, so we got ours with chocolate sauce and whipped cream.

Tell me how good that is. That is so good I have no words so I’m just going to take a second bite.

And leave me less?

I don’t even know where to begin. Like, it is amazing.

It is a proper waffle guys with lots of chocolate sauce, lots of whipped cream. Nice and sweet. Yes. Oh. You want a flier?

And what did you just get handed? We’ve just been invited to a special event tonight. There is some kind of festival and there is going to be a clubbing stage guys. So, we’re going to eat our waffle first and then have energy to go clubbing apparently.

Alright, I haven’t been left with much but I guess I’ll take whatever it is that there is left.

Chocolate sauce and whipping cream is a winning combo. And you’re right, those are freshly made waffles done properly. How can I eat the stuff back home after this?

So what are the different toppings you can get on these waffles?

Lots of different toppings. You can get strawberries, wild berries. There was icing sugar. Even butter. So I mean there is something for every taste out there.

So price point for the waffle? So in terms of this waffle it was 4.50 Euros. Not exactly the cheapest snack but definitely delicious. 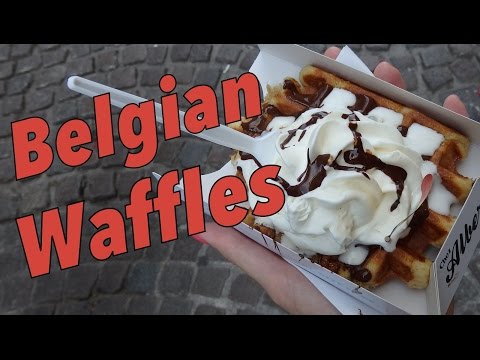