In our latest travel adventure video in Finland, we travel to Rosala Viking Centre Island and Bengtskär Lighthouse via a boat ride from Kasnäs.

Today we’re in the little town of Kasnas and we are waiting to catch a ferry that is going to take us to a very remote island, which apparently is home to one of the largest lighthouses in the area.

We are now visiting Rosala which is an island which is home to a Viking Center. So we enjoyed a really hearty Viking feast that was a thick soup with potatoes and white fish and we also had some black rye bread with butter and after that meal we’ve just been enjoying the island. There is lots of games and activities for kids. You can try archery. You can try walking on stilts. They have a maze. Rabbits that you can feed. So it’s a nice place to spend a sunny day.

We’ve arrived at the lighthouse and it’s just on a big rock out in the sea.

So to get here we had to take a boat. We’ve been traveling for about forty five minutes and as we were approaching the island it started to get really choppy. The waves are pretty high. So yeah, we’re out here in the middle of the ocean. There is no land. It is just a pile of rocks.

I don’t know what is worse. Air turbulence or choppy waters.

So right now we’re making our way up the two hundred and fifty two steps that we have to climb all the way up to get to the top of the lighthouse. And apparently there is a couple of ladders too.

And here in the lighthouse they also have a very small chapel where people can get married. 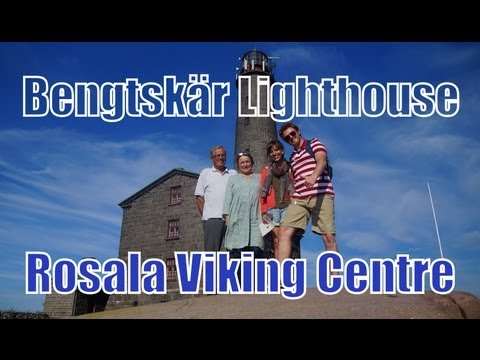