This is a travel video from a bicycle tour we took around the historic UNESCO heritage city of Melaka (Malacca), Malaysia early in the morning before it became unbearably hot and humid.

Malacca is definitely a pedestrian friendly city; however, considering how spread out it is, an even better way to cover my territory in a short period of time is to rent/borrow a bicycle from your guesthouse.

Almost all guesthouses offer bicycles for rent (some even provide bikes for free) which you can be assigned for the day, week or even month.

Malacca is one of the most hot and humid cities I’ve ever visited anywhere in SE Asia. Thus, waking up early to beat the high heat and chaotic traffic is highly recommended.

On our particular journey, we started off in Chinatown (specifically Jonker Street) winding our way through the many back-alleys and narrow streets.

We noticed many crumbling colonial mansions and Chinese lanterns. Also, there were plenty of cats and dogs lounging around that we stopped to pet.

Upon crossing Melaka River (Malacca River) we observed the scenic riverside views before heading along the more central areas of the city nearby the many malls and central pier.

Malacca was granted World Heritage City status in 2008. Considering it is one of my favorite cultural HUBS in all of SE Asia, I’m surprised it took this long to receive such a distinction.

In total, we covered – on our bicycles – in an hour what may have took half (or even a full) day to tackle by foot.

Overall, it was a wonderful way to see the many attractions in Melaka, Malaysia and we highly recommend hopping on bike to tour the city as one of the the top things to do in Malacca.

What is your favorite way to explore a new city you’re visiting? 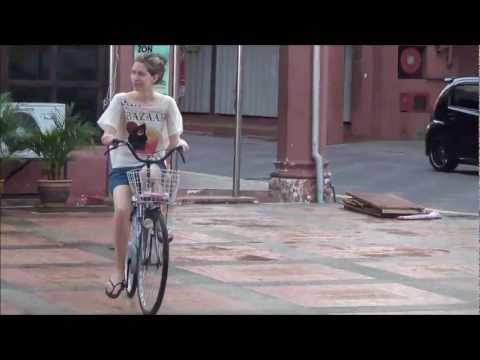