Our second day in Finland was full of adventures.  We started off by going on a biking tour of Helsinki which covered the downtown area but mostly focused on scenic sections mere kilometers away from the heart of the city.  It was wonderful getting out into the woods, meandering around the water and visiting small local communities.  In the evening we went kayaking when it was still light outside to a remote island where we made a bonfire.  On the way back home, when it was dark we paddled back with nothing but the moon and our headlights guiding us.

Someone is hungry. Yes.

That was a really filling breakfast. I think we’re both just stuffed. We’re going to go on a very small walk around jail hotel and show you the sites.

They have a really cool little garden where it appears they’re growing their own vegetables.

It is a beautiful day to be outdoors today and we are all geared up to go on a bike ride. We are going to be taking a tour of Helsinki.

How is it going so far? Oh, I’m getting a workout here.

You look really silly with your ball cap and helmet on top. Come on, I’m starting a new fashion trend over here. This is what is considered cool these days.

Oh really? No, definitely not. But what is cool is that just getting outside of Helsinki, a few kilometers, you’re out right in the woods. This is amazing. Let’s do a 360.

We just finished our four hour long bike ride around Helsinki and next up we’re going kayaking. Right now it is nine PM. It is still bright out and I think we’re supposed to be back at midnight, so let’s go.

Normally I like to do a single kayak because I don’t really trust Sam on the water but I’ve been talked into this double kayak for newlywed couples.

Teamwork. Except, I’m the only one paddling because you’re sitting back there filming. Yep, that’s about right.

Enjoy a few beers in the back of the double kayak. Yep, I’ll just have the beers, sit back and let her do all of the work. Right, Audrey? Oh, hush.

No, don’t make it wobble. I’m going to tip it over.

It is eleven thirty now and we are paddling back home in the dark with nothing but the moon and our lights to guide us. 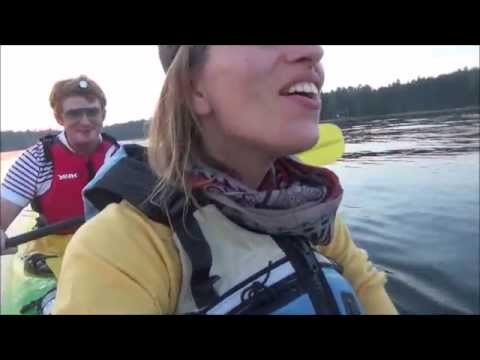