There are many traditional Korean dishes and cuisine; however, equally as important, in modern Korean cuisine, is the influence of foreign elements in Korean cooking.

There is no dish that exemplifies this more than Korean Budae Jjigae.

Food shortages were a typical problem in Seoul, Korea after the Korean War.

American base items such as hot dogs and spam suddenly became highly coveted items for protein.

Even today, gift boxes of spam are given out as holiday and Christmas presents, as though it were a high class foreign food item. As an example, Audrey was surprised to receive a box of spam as a gift from one of her director.

Spam, at least in Canada, is considered one of the lowest grades of meat; however, in Korea it’s quite a delicacy.

Korean army base soup is the ultimate fusion stew; ingredients such as sliced cheese, baked beans and/or macaroni make an appearance.

In the past, combining hot dog bits and spam with whatever was available became the norm. Today, this is still how the soup is made. If you go to one restaurant they will make it in a particular way; whereas another restaurant will have its own local twist on the hearty soup.

Our opinion of the soup wasn’t entirely favorable. Compared to other more traditional Korean soups this came up short in the flavor department. We tend to prefer thick soy bean based soups with tofu, seaweed and other ingredients. This fusion style sew seemed to lack identity; although, it tasted ‘okay’ it wasn’t something we’d go out of our way to eat again in the future.

One of the highlights of the meal, was a cute Korean boy who jumped on top of a table and started to perform by dancing and sticking his tongue out at us.

The performance by the little guy made up for the lackluster meal.

Do you enjoy Korean fusion food? How about traditional Korean meals? Let me know in the comments below what is your preference: 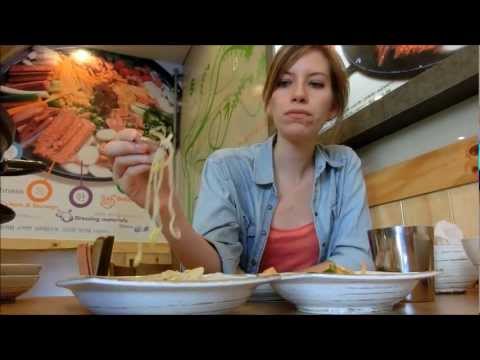