If you have trouble viewing this video click here: http://youtu.be/Evg5xK1bYU0

Cooking Israeli Food at night with travel & food bloggers along with students from Haifa University.

So this evening we’re doing a pretty exciting project. We’re here at Haifa University and the students from two universities in the region have come together and we have been working to cook some food from the region. Some Israeli food.

So this is kind of like a pop up kitchen. We’re cooking outdoors and we’ve got all range and levels of cooks. From lowest – me. From people who are almost like master chefs in their own home. It’s been fun. It has been.

So we made a karobee, carrot, fresh mint, walnut and fresh parley salad. We put a little of fig, honey glaze on it and some fresh lemon juice. And salt and pepper and we have a masterpiece. And the matchsticks were cut by this young man named Nomadic Samuel. He just happened to come in and land right here in Haifa and he’s cooking with us, so now he’s going to go from being a travel blogger to a food blogger. Now that he can make matchstick carrots he thinks he’s Gordon Ramsay.

What have we got over here? This is our anti-pasta. And I’ve got my hands. I need to put lemon here. So you’re squeezing lemon on top of it. On top of the eggplant and garlic. That smells good.

Looks like pears with brown sugar and cinnamon. This is the crumble. Is it like an apple crumble? It’s a pear crumble. It’s like apple crumble but with pears.

So the fruits of your labor. I actually helped make this if you can believe it. All of this fine chopping. Mmmmmm.

So can you give us a tour of your plate? Compliments of Ally from Ally’s Kitchen. She taught me how to chop today. hahaha.

A tour of my plate. So we are having eggplant over her. Tabouleh and this was made with cauliflower. We have our stew with potatoes and chicken, carrots. And this lovely salad with walnuts and carrots that Sam helped make. And which one did you help make? I made the stew. 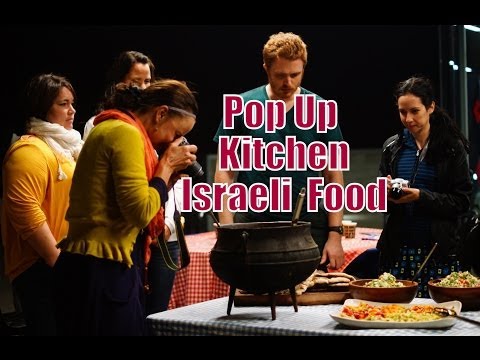