This is a video showing what the crazy, chaotic and hectic – yet functional – traffic is like (including crossing cross the street) in sprawling Ho Chi Minh City (Saigon), Vietnam.

I’ve set foot in many of the biggest cities in Asia including Seoul, Tokyo, Hong Kong, Shanghai, Singapore, Bangkok and Kuala Lumpur; however, I’ve never been to a city with traffic quite like Saigon.

As you lurch out onto the street it’s almost like you’re in real life video game where the idea is to dodge passing scouters, motorbikes, vehicles, street vendors and other pedestrians somehow without managing to get hit in an environment without pedestrian crossings; however, unlike video games, there isn’t a second life, another chance at completing a level or an invincibility mode as you risk your own life with every footstep as a sea of vehicles compete for inches of space that don’t exist.

As bad as this seems, it’s all functionally chaotic. If you learn to cross the road like locals your chances of being hit are greatly diminished. The key is to move across the road with confidence and consistency to your pace. If you slow down suddenly or jerk to speed up that’s when you’re most likely to get run over. As crazy as it seems, the Vietnamese drivers are skilled at artfully weaving in and out and timing your next step to pass by you without causing a collision.

For those raised in Western societies, where jaywalking is illegal (traffic or not), it’s counter-intuitive to start walking across a busy street with oncoming traffic. When in Rome you must act like the…

This is no different in Vietnam. Basically everything you’ve learned about road safety and pedestrian rules needs to be thrown out of the window.

You have to come to Saigon to see for your very eyes! And if you can’t please enjoy this video which I feel captures what traffic is like in Saigon; it includes a clip of me crossing the street while filming scooters dodging around me. 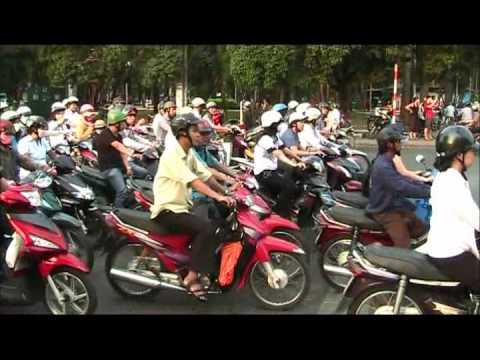