When Audrey and I first found out we were coming to Queensland, Australia one of the first things we got really excited about was to potentially have a chance to have authentic encounters with animals native to Australia.  Holding a koala, petting and feeding a kangaroo and spotting a Wallaby for the first time were things I’ve always dreamed of.  However, visiting the Currumbin Wildlife Sanctuary, located just a few kilometers from the Gold Coast, was much more than just that.  During our tour we had a guide who accompanied us explaining fascinating facts about all of the animals.  Later on in the morning we got to visit the onsite veterinarian who treats injured wildlife from nearby areas.  The high level of care and compassion by Australians towards their wildlife is at a standard I’ve yet to witness anywhere else in the world.  Instead of just having mere animal encounters I left Currumbin Wildlife Sanctuary with an education.

This morning we are visiting the Currumbin Wildlife Sanctuary here in the Gold Coast and we are going to be having lots of animal encounters. Now, I’m really looking forward to meeting a kangaroo because I’ve never been up close to one, so hopefully I’ll get to feed one.

And I’m most looking forward to feeding lorikeets – a very colorful and energetic bird.

During our visit to Currumbin National Park, we had a chance to get up close and personal with Kangaroos.

Feeding and petting the Roos was one of the top highlights of visiting Currumbin.

Spotting animals we had previously never heard of was also part of the program, including the orange tree Kangaroo and one of Australia’s most dangerous birds the Cassowary.

And no trip to Currumbin would be complete without spending a little bit of quality time with the adorable koalas.

Overall, we had a really cool experience here. I like that it had more of a conservation environment as opposed to being like a zoo. We had the opportunity to get up close and interact with the animals and it was also very educational.

So someone got themselves a new souvenir. Check it out. I’m loving it so far. It is light, it is cool and feels awesome on the head. 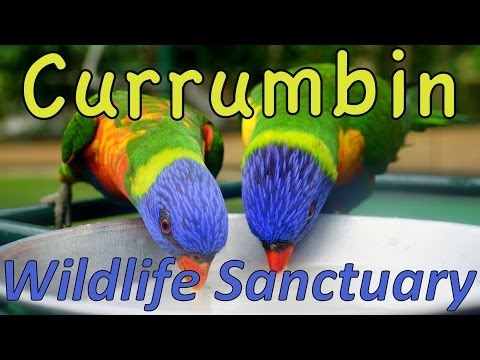