After having lunch we set off on the second leg of our journey for the day en route to explore Ta Van Village (Dzay Tribe) in the mountainous region of Sapa, Vietnam.

After a long hike in the morning lunch was anything but relaxing. The Black Hmong ladies who had followed us for the duration of our hike, making animals out of leaves, smiling and peppering us with questions and grinning from ear to ear suddenly changed their demeanor in complete 180 degrees. “You buy from me. Then I go home.” “You don’t buy one. Buy two.” “Buy from me. I made you horse.”

Although I could see this coming a mile away, I still found it annoying. Although I appreciate these ladies depend on tourism to earn a living, I don’t feel as though tourists should feel such extreme pressure to buy something. One particular gentleman at our table, who steadfastly refused to buy anything was harassed to point where he did eventually purchase a tiny trinket, just so that he could eat his lunch at peace.

When it comes to vendors, touts or service providers in the travel industry, I’m all about rewarding good behavior and not giving in to the pressures of tactics. For example, in this particular situation, the ladies realize that if they press hard enough they’ll eventually annoy the heck out of tourist to the point they buy something. Compounded by the fact they’re tired from the long hike, more likely than not, they’ll be willing to pay a bit of money to have a quiet lunch.

Although lunch was bland, I was immediately thrilled that my stomach could handle the noodles, as just mere hours before I had still been suffering from a severe case of food poisoning.

The morning hike had tested my fitness levels and I had to push myself to the max to keep up with the rest of the group only being roughly around 70% of my normal self. My legs felt like jello at this point in the day and I couldn’t believe we still had another significant portion to cover for the rest of the day. Mentally, I was preparing myself for what I felt I couldn’t possibly physically accomplish.

Luckily, the second leg of the journey was both shorter and less physically demanding. Roughly speaking, I think we walked only 1/3 of the distance that we covered in the morning and there was less variability in the terrain on this portion of the hike.

When we finally reached Ta Van Village I felt a sense of relief knowing I could retire for the evening. Prior to dinner I spread all of my belongings out by my makeshift bed and napped for nearly two hours.

Our traditional home-stay was a basic wooden two story house which featured mats laid on the floor with a mosquito net covering them. I feel confident enough, that it wouldn’t have mattered what the accommodations looked like for the majority of our group. We were all so tired from the hike we could have slept on top of a rock.

Although dead simple, in terms of style, I slept like a baby given how absolutely knackered I was from the trek. I knew that I needed a good sleep to be prepared for another go of it the next day. 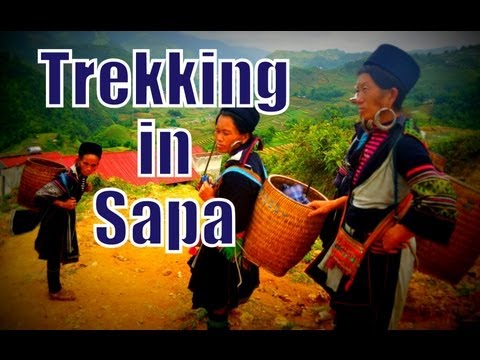