I have a confession to make. When I discover a restaurant I love while on the road I often return multiple times. There have been a few cases where I’ve come back daily and I sometimes even frequent the same place multiple times in one day!

Since arriving in Prague I’ve discovered a gem of a local pub where I can’t seem to get enough of their generous portions of goulash and cheaper than water frothy Pilsner ale.

Goulash is a stew (or soup) consisting of meat, noodles, vegetables and other ingredients seasoned with paprika and other spices typically smothered in a thick gravy sauce.

The reason I’m so enamored by this particular local pub is that it is frequented almost exclusively by locals. Unlike ‘tourist restaurants’ nearby the old quarter, servers here speak limited English, only special English menus exist and prices are literally half or a third of what I’d pay elsewhere. I almost forget to mention that the food is undeniably delicious and the portions are generous.

The perfect complement to the Czech goulash (gulyás) is a pint of Pilsner and Czech dumplings (hovězí guláš s knedlíkem) and/or Czech bread (knedlíky) to mop up the gravy.

Pilsner, one of my favorite beers from around the world, has a golden color, light taste and high level of froth. Deriving its name from the city of Plzeň, Bohemia, Czech Republic in 1842, it is a popular beer both domestically and abroad.

I almost forgot to mention the appetizer, Czech fried cheese (Smažený sýr) usually either Hermelin or Edam breaded and fried. This was a nice salty addition to the meal that we both thoroughly enjoyed.

Overall, we enjoyed the afternoon bar patio setting with great food, local prices and a fun atmosphere. When visiting Prague be sure to check out a local pub specializing in traditional Czech cuisine.

It is a beautiful day here in Prague. We are having an early dinner outdoors in the patio. And of course, when in Prague, you have to eat Czech food. We’re going to be introducing you to some new dishes.

We’ve found this awesome local little place right across from our apartment and we’ve been coming here daily.

In my hand here I’ve got myself a Pilsner beer. This is like an Czech institution. It is known for its golden color and high level of foam and a nice light taste. Okay. Take a drink already.

The best thing about it – it is cheaper than water and cola.

And you know I’ll be having more than one.

We got ourselves a fun little appetizer here. It is three different kinds of fried cheese and I found this on the vegetarian side of the menu. Let’s taste test it.

This looks nice and creamy and it is a little green inside. It might be blue cheese. I can’t tell what kind of cheese it is. It has been breaded in bread crumbs, it is nice and gooey and melt-y inside. Is it tasty? It is definitely tasty.

Time to try it. Well? That is delicious. Deep-fried cheese, I’m a fan.

And now a third variety. Let’s try this last one. It is definitely different but again I’m not really sure what kind of cheese that is.

Oh, the anticipation. I’m getting giddy about the goulash.

Up next we have a big plate of goulash. Now goulash is actually Hungarian but the Czech Republic does have its own variety. What differs between the two is that the Hungarian is usually served with meat, noodles and vegetables and the one from the Czech Republic only has meat, so let’s dig in.

It smells amazing. The meat is really soft and tender and the sauce is so thick and savory. It is perfect on a cool day.

The cool thing here is you can try the goulash with either potato cakes or steamed bread. We’ve got the dumplings right now.

It is just such a lovely gravy here. This is honestly the best goulash I’ve tried anywhere. And you’ve been eating it here every single day for lunch and dinner right?

Here I’m having a potato cake, which is kind of like mashed potatoes that have been flattened and deep-fried. It is really tasty with the gravy. Oh yeah, I like that way better than the bread.

Final thoughts? Eat locally and avoid the tourist traps. It is so much better and cheaper. 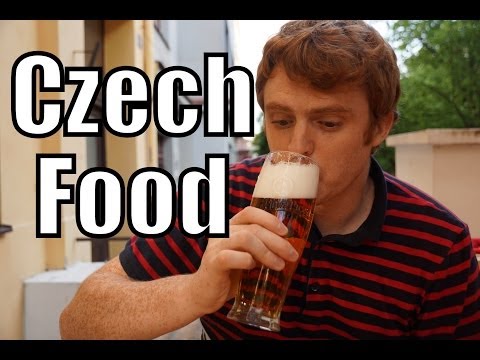