On a quest to try a deep-fried Mars bar, we found a local chip shop in Edinburgh, Scotland that specialized in deep frying chocolate bars including Snickers bars and also Twix.

I remember seeing a program featuring Scotland nearly a decade ago where a deep-fried Mars bar was featured.

In my teenage years at the time, I thought it was an absolutely brilliant idea. I loved deep fried chips, battered fish and fried rice. Why not fry a chocolate bar?

Now that I look back in hindsight, I wonder if this was the rational of the chipper who first fried a Mars bar in the mid 90’s in Stonehaven.

Little did he/she know what a phenomenon they would create.

Now nearly 1/4 of all chip shops in Scotland offer the option of deep frying a Mars bar (or any chocolate bar for that matter). Some even feature a dedicated fryer exclusive for the chocolate bars only. In popular tourist areas certain shops sell as many as 50-200 bars per week!

Hunting down a shop in Edinburgh was a little more tricky than it is in say Glasgow.

When I finally did locate a shop, I immediately noticed an impressive selection of different chocolate bars.

Upon the recommendation of the chipper I decided to go with a deep-fried Mars bar, deep-fried Snickers and deep-fried Twix.

Although this may sound glutinous to some, I felt a responsibility to report which bar was the best 😉

The kind owner let me into the back of the kitchen to film and learn the tricks of the trade first hand: “You just stick it in the batter and shake it around. It’s a secret recipe. Keep it in the fryer for 2-3 minutes. It’s 170 degrees.”

Before I knew it, I had four slabs of deep fried chocolate in my hands and it was time to experience a taste test. Audrey, feeling queasy from an upset stomach, left me to my own devices to sample all three for the two of us. Oh, what a pity 😉

I started off with the Mars bar. The first thing I noticed was that the bar appeared to have shrunk a bit in size and was a little flimsy from the melted chocolate inside. Upon taking my first bite I felt the crispiness of the deep fried batter give way to melted chocolate and caramel. This was so much better than just a regular bar on its own. If this wasn’t the most unhealthy thing on earth I may have indulged ad nauseam.

Background music playing.
What’s your name? Sam. Sam how you doing man? We’re doing a deep-fried snickers, a Twix and we’ve already done a Mars bar already. Awesome. I’m going to unwrap it. Stick it in the batter. I can’t tell you that because it’s my secret. Hahaha…secret recipe? Of course. The Twix. One. Two. Mix it around. Give it a little shake. And there it goes. Ah, that looks good. Now for the Twix. Here is the Twix. There you go. How long do you put them in there? Emmmm, we just keep it about…2 or 3 minutes. We fry them separately. This is just for the Mars bars. Mars bars only. Awesome. So the temperature. This is 170 degrees. And while the batter cooks the chocolate will melt. So the batter will cook before the chocolate. Ahhh, perfect. That’s so cool.
So we’ve been hearing lots about the Mars bars but Sam here went overboard and tried three different chocolate bars that have been deep fried. So what do you have? Well, at the recommendation of the guy at the chip shop. He recommended I also try the Snickers and the Twix bar, so we’ve got it all right here. Let’s unwrap that. I don’t want to drop it here. Okay. Let’s see that thing of beauty. Isn’t that gorgeous. Alright, so which is which? So I believe this is the Snickers. We’ve got the two Twixes here and that is the Mars bar. Alright. And you’re feeling a little queasy today, so I’m going to be the one trying them all. Yes, you are. Enjoy! So first up. And you can tell they really feel as though they’ve been deep-fried and melted. This is flimsy in the hand. Ewww. Yeah, this is a Mars bar. I can tell from what is seeping out. Take a bite. Oh, Wow.
That is so much better than just having it on its own. It’s all melted inside. It’s gooey. And you’ve got the crispiness from the batter on the outside. Mmmmmm. One more bite. Next up Twix. Next up we have the Twix. This one is a little longer. Oh yeah. Is it still crunchy? Yeah, it’s still crunchy on the inside. You can see this. All the chocolate has melted on the outside. It’s just so much better than having it normally.
And the best for last. Best for last. My favorite of all these bars is the Snickers, so I have high expectations for the deep-fried version here. The battered version. Oh yeah. It just melts. All caramel and chocolate inside and the peanuts. Oh,. Let’s see the inside of it? That is amazing.
Okay, so you’ve tried all three. Which was our favorite? Definitely the Snickers. Why? Because I love Snickers bars and this just enhanced it. So, it’s not surprising that taking something that is already unhealthy and making it even unhealthier would make it taste better. 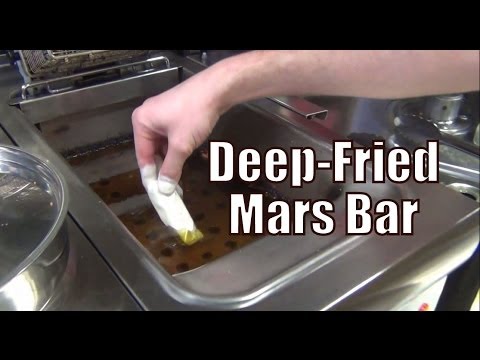