In this video we (Sam and Audrey) go to yet another Korean restaurant; this time it is to a Korean barbecue where you can cook your meat at the table.  Cooking self serve would typically be a dangerous thing when I’m at the dinner table, but surprisingly we did rather well in this particular occasion.

When going to these type of do it yourself Korean restaurants, we usually opt for the popular samgyeopsal (pork belly), but today we decided to order galbi instead. In Korean, galbi (갈비) refers to ribs, and this cut is soft, lean, and juicy.  If you’re not a big fan of fat we’d recommend choosing the galbi over the samgyeopsal – it’s a much healthier cut of meat.

While getting down to business at the dining table, we seared the long beef strips for a few minutes before picking up the tongs and a pair of scissors to cut the meat into more manageable pieces. Cutting meat with scissors is something that neither of us had seen before coming to Korea, but now it has become second nature to cook the meat this way.  I have to admit that when I now see a pair of scissors I don’t look at them the same way 😉

As usual, we received a myriad of side dishes including an egg soufflé and a soybean soup. The egg soufflé was so delicious we had to ask for seconds.  Overall, it was an epic feast with the wonderful main meat dish and all of the delicious side dishes.  I often wish restaurants around the world would be as generous with their portions and refills as they are in Korea. 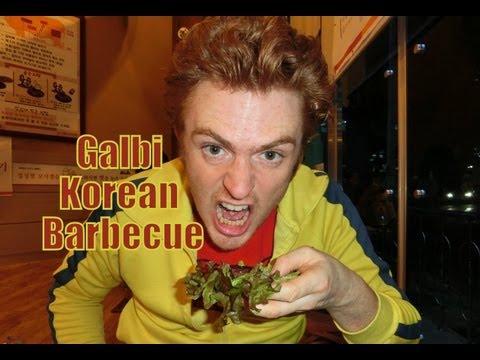