If you have trouble viewing this video click here: http://youtu.be/mUC7Q69_fEU

It´s not every day that we travel and have the opportunity to sample cuisine unique to a specific country. A doughnut is a donut more often than not; however, a Picarone is uniquely Peruvian and as such doesn’t translate well in English. Apparently, this Peruvian dessert (and common street food snack) originated during the colonial period. Consisting principally of squash and sweet potato dough it is typically served up in ring formation with a healthy dose of syrup. Often the syrup is either a honey or molasses which is called chancaca. We found it most similar to an airy waffle oversaturated with syrup. The key is to sop it up with as much syrup as possible. Although it comes with several rings it is actually quite a bit lighter in taste and texture than it appears to the eye. If you’re wandering the streets of Lima be sure to try one – it’s cheap and delicious!

So this afternoon we are at Parque Kennedy and we are here for some dessert. We’ve been eating like pigs all day long but there is still a bit of room left for a little something sweet, so we’re going to try Picarones.

Look at this – I already have a bee following me because of the honey. Isn’t that amazing?

Woah. And we thought about getting two orders. Haha. This will be plenty.

Alright, so here we have our dessert. These are Picarones and they are like fried rings. Fried dough made with sweet potato and pumpkin and they have a sweet honey drizzled all over. And they’re uniquely Peruvian cuisine. Oh, yes.

So I’m just going to go for it and take a bite. Dig right in.

Mmmmm. These are so fresh. Wow. Really fluffy and airy. Can you taste that honey? Oh, yeah. I sure can. And like they are so light I’ve already finished half of one. I understand why they give you five. You can just devour them in a few minutes. And we’ve got a guest who is interested as well. Hi, Kitty. Hello, Mr. Meowzers.

So as I mentioned previously, this is a uniquely Peruvian dish. And as such there isn’t an English equivalent. I suppose we could call it a Peruvian doughnut with honey. And so that is what we’re going with. And this is my first bite. My first time to ever try this so I am really excited. I am sopping it up in honey. Woo Hoo!. Honey syrup. Let’s try this.

Oh my gosh. That is so good. You know what it reminds me of? It kind of reminds me of a oversaturated waffle with maple syrup or honey. It’s like where you pour like three times as much as you actually need on the waffle and then you eat it. This is what it tastes like right here. Mmmm.

I don’t mess around when I eat food. What can I say.

So this tasty dessert only cost us five Soles. That would be one sole for each donut that we’ve already eaten.

That is pretty affordable actually with the exchange rate it would be about a dollar seventy-five and you do get a lot of food for that.

So if you’re looking to pair this sweet treat with a little beverage you can get something called Chicha which is a purple corn juice that goes perfectly with it.

So there are five of these but only two of us. So who gets that third one? We split it down the middle Sam. Oh, I don’t agree with that.

There are hundreds of cats in this park. Look here is another one. Meow. Meow.

That was a delicious sweet treat and we’re going to be back at this park again very soon to film some more street food. 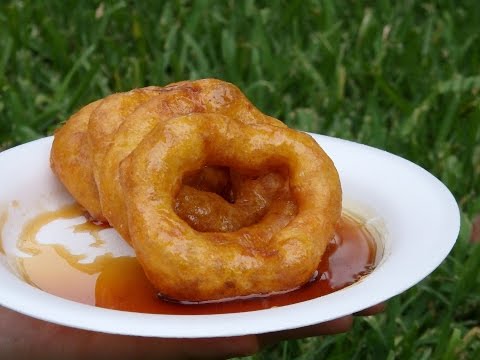