When Audrey and I found out we’d be heading back to Finland, I instantly thought of Salmiakki. For nearly a year I’ve been craving this Finnish black salty liquorice, known as Salmiakki or Salmiak. Unlike sweet black licorice that I’ve had back home in Canada this is overwhelming salty or what some have described as ‘tongue numbing.’

The first time I tried it I was instantly hooked; whereas most foreigners find it absolutely disgusting and end up spitting it out. Basically, it’s a polarizing food that some find gross and others adore.

In my opinion, it is like taking licorice to a whole new level of flat our awesomeness. What gives this Finnish licorice its extremely salty and astringent taste is ammonium chloride.

This tongue numbing exotic Finnish delicacy is also popular in neighboring Nordic countries such as Sweden and Denmark.

Although other Finnish licorice exists, Salmiakki is by far the most popular.

If any of you had the opportunity to watch the Salmiakki video we made last year, you’ll recall that Audrey found it repulsive and spat it out on camera.

Thus, heading into our Salmiakki taste test this time around we already knew that I would love it and she would hate it.

Regardless of the predictable outcome I had unfinished business to do. The last time I was in Finland, I only had a chance to try the Salmiakki candy. This time around I wanted to make sure we taste tested Salmiakki chocolate, Salmiakki liquor, Salmiakki spirits and Salmiakki ice cream. Oh, I almost forgot Super Salmiakki!

When you watch this video you’ll see a wide range of Salmiakki products which you can consider purchasing including the most popular brand of all – Fazer. Fazer Salmiakki is worth trying.

Will Audrey spit it out again or nearly vomit? You’ll have to find out by watching 😉

If you have adventurous taste buds and you love salty foods, I highly recommend trying Salmiakki the next time you travel to Finland. Part of the joy of visiting a place is embracing the local culture. Thus, I recommend diving right in as part of experiencing Finnish culture when considering things to do in Finland.

We’re here in Finland today and we’re going to be trying Salmiakki. Now for those of you who are not very familiar with this it is a salty black licorice. We actually got to try it last year when we visited and I hated it but Sam loved it. I think our reactions are going to be a bit predictable. Now today we have six different kinds of Salmiakki so let’s get started.

The special ingredient of Salmiakki is ammonium chloride and that is what gives it its salty and very overpowering taste.

Oh boy, this is a real treat. This is a Salmiakki ice cream and we decided well we better eat this first before it actually melts. Let’s open it up and it is from Fazer. From Fazer brand which is a really popular brand in Finland especially for chocolate but it is also really popular for Salmiakki as well.

Okay. That is hilarious. What is funny about this is that it is basically shaped like a Salmiakki candy would be. So it has got…yeah. It looks quite authentic here. Let’s have the first bite.

That is the best salmiakki I’ve ever had. In ice cream form it is a lot sweeter and it still has got all of that overpowering salmiakki taste. I just love this. I’m going to eat the whole thing.

I guess now it is my turn. I’m kind of hoping the middle is vanilla flavored. Yummy yummy? Urgh. No. Um. It is not as bad as the candies I’ve had before but it still has a really strong Salmiakki taste and I mean the ice cream is actually a bit salty which I don’t think should be the case with ice cream. I’m giving it the thumbs down unfortunately.

That one didn’t last very long.

Next up we’ve got Fazer Super Salmiakki and this of the candy variety. Let’s open this one up. And already I can tell – I’ve tried other Salmiakki candies but this one feels a lot harder, so I have a feeling it is going to be a bit different. It is not going to be as chewy. Let’s give this a shot. Okay, so you can definitely taste the Salmiakki here. It is very strong.

As I expected, it is a hard candy and it is not very chewy. I think it is a really great type of Salmiakki product you take with you maybe when you’re driving in a car or something. You can just pop one in your mouth and it will last quite a while. Just let is sit and roll around on your tongue.

I guess it is my turn to give it a go. Oh, the excitement!

How much longer do I have to taste it before? Put the whole thing in your mouth.

It is like really salty. Saltier than the ice cream. It tastes like horrible medicine. There is nothing redeeming about it. Yeah. Spitting sounds.

I’m actually not entirely sure what this Salmiakki product is. These look like maybe more kind of a sugary type of rolls. This should be interesting. Let’s try these. I’ve never had them.

Kind of neat. They’ve got a brown filing. Mmmm.

Okay, yeah. These are chewy and really sweet and these are more like your type of traditional candy I guess. You really taste the sugar along with the Salmiakki. Which is strong but it is not nearly as strong as the harder candy.

So I’m still recovering from the last one but since these are super sweet and covered in sugar, I figured I’d give it a go. A little nibble.

I’m not sure what the middle part is. It is brown. Coffee maybe?

Urgh! Have it! Hahaha! You can have it!

Okay, so as not to torture Audrey, she can be exempt from these next two things that I’m going to try. I’m just going to make her try the chocolate.

Next up we’ve got Salmiakki in a box and we’re going to try a different brand here. I believe it is called Halva. Let’s try that. Whoops. They just fell out.

Okay. I can tell right now these are really hard. Hard salmiakki type things. Let’s have a look at them.

Can you see them there? See, that is what the ice cream cone was shaped like. Just like this. So I’m going to put them both in.

Those are really hard and small. They are similar to the ones I got from the Fazer bag from the first one that I tried. But yeah, they are really strong and again like kind of just slowly dissolve in your mouth. You can just kind of chew on them or just let them roll around on your tongue. And they are long lasting, so. I think the best thing about them is that they come in this little package here, so you could just like walk around with them in your pant pocket and be like hey I feel like some Salmiakki and just whip it out and have a bite.

Alright, next up we’ve got the mixed bag of Salmiakki and this is also from Fazer. As you can see from on the back of the package there is all of the different shapes and sizes. Let’s open that up. There we go. You know what – I’m just going to dump a whole bunch of these on here so we can kind of see what they look like. And I’m going to just start trying one of each. This is a different one. This one is different.

Okay, so I’ve got four in my mouth right now and yeah they really are different. Some of them are little bit larger and more chewy and then the other ones are hard and they are kind of similar to the ones that you can get like the pocket sized ones. They are hard and you kind of have to suck on them a bit longer but yeah this is for Salmiakki lovers. This has got it all. You’ve got all shapes and sizes here.

And last but certainly not least we’ve got Salmiakki in chocolate form. And much like the ice cream I have very high expectations for this. I hope it is going to be sweet and chocolate-y and just overall delicious. Let’s open this.

Okay. From the outside, as you can see, it looks just sort of like your normal milk chocolate bar but let’s break it off here and see if we can see if it is any different.

Okay, it still looks normal to me. Mmmmmm.

Oh, it is so good. Like it is just amazing. Like, chocolate is stellar. Salmiakki is stellar. Putting them together is just an awesome combination. This is just as good as like chocolate and peanut butter as far as I’m concerned.

Okay, I’m going to show this part. And here you can see it is sort of like stuffed inside of the milk chocolate the same way a caramel milk chocolate might be like or if you had come to Canada or the US and you have like the peanut butter milk chocolate. How it is just kind of like in the middle and it is in a bit of a creamy form.

Two thumbs up for this product.

Alright, well, I do like the Karl Fazer chocolate bars. I have been eating them every single day since I’ve been back. I’m not so sure about the Salmiakki. I’ll try a little corner. Hey, that is not right. The salmiakki is in the middle. You have to take a bite right in the middle. Come on. Last bite.

It is like eating chocolate that has been stuffed with medicine and salt. I mean the chocolate is great and it kind of helps mask the Salmiakki taste but I’d rather have a plain chocolate bar.

Alright, to sum of all of this up. I liked every single Salmiakki thing tried; however, there were things I liked more than others. My top two, were of course, the ice cream and the chocolate bar because I also have a sweet tooth and combining salmiakki with milk chocolate and ice cream. That is just amazing. Okay, next up I do really like these ones too. These like. These candies that are a bit more sweet than the other ones. So I rank those really highly.

So among the more I guess traditional hard candies like these ones would be great to carry with you in your pocket. Although I do prefer the ones that are a little chewier so this is just more portable.

And amongst these two I would have to say I’ll go with the mixed bag. So everything is awesome.

If you’re in Finland you absolutely have to try this. It is the kind of polarizing thing. You’re probably either going to love it or hate it. And most foreigners who – especially those who haven’t tried liquorice before – are probably not going to like it. I love it this stuff, so if you don’t finish your bag or your chocolate bar or your ice cream you know where to send it. 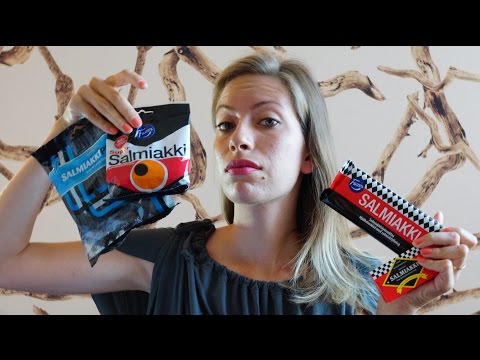