If you have trouble viewing this video click here: http://youtu.be/WENkCVxg_m0

Having spent a decent chunk of time of Greece it didn’t take us to develop a love for Greek cuisine. For our final food video in Athens, Greece we visit a traditional Greek restaurant where we dine on dishes such Greek salad, Saganaki (fried-cheese) and Moussaka. If the food wasn’t a highlight enough in and of itself we had an extra bonus of having a talented Greek musician playing traditional music during our meal.

It’s lunchtime here in Athens and we are starving because we’ve been walking around all morning. So we found a little restaurant. We’re going to be eating Greek food obviously. And we are starting out with some homemade bread and black olives. Those are really good olives.

So we’ve now been in Greece long enough to know what some of our favorite foods are. And we’re having three of them here. We’re having Greek salad which doesn’t need too much of an introduction, Moussaka and also Saganaki which is a fried Greek cheese.

Yum, now we are just waiting for our order.

So first up we’re having something called Saganaki which is a fried cheese. And it gets its name from the pan that it is fried in. Apparently it has two handles and just have a look over here. It’s a nice chunk of cheese. Now it is nice and golden from being fried. And it also comes with a little bit of lemon which we can drizzle over top. Oh yeah, drizzle, drizzle, drizzle. And this can be made with three different types of cheese. You can have Gruyère, Halloumi or Sheep’s milk. And it is very very salty and very greasy since it has been fried. And it is probably not very healthy but it is so good that we just keep ordering it with every meal here in Athens. Let’s have another bite.

And what are you having? Now this next dish is one of personal favorites. It’s called Moussaka. And let’s take a look down at it. So you can see that there is a layer of Béchamel sauce, you also have minced meat, you have potatoes and you have eggplant.

So apparently this is a pretty old recipe, right? Yeah, this dish dates back to the former Ottoman Empire. And you can also find it in countries such as Albania and Turkey presently.

So time for me to finally have a bit of this. Wow, it is so thick! It’s like a Lasagna almost. It almost looks like a Sheppard’s Pie to me. Yeah, that’s actually a better comparison. Mmmm. That’s fantastic.

And because we’re trying to keep this a balanced meal we did order a salad. A Greek salad because this is Greece. So as you can see we’ve got tomatoes, feta, cucumbers, black olives. We’ve got some peppers and olive oil drizzled all over top with a little bit of oregano sprinkled as well. So it looks really really good. Let’s take a bit of that. Oh yeah. Don’t forget the feta cheese. Yeah, that’s right.

Let’s get a bit of everything. Onions. Cheese. Tomato. Hahaha.

That’s really nice. The olive oil has a really special flavor here. You can almost taste the olives. It’s just really good and a nice and refreshing salad. Really nice.

And price point for that delicious Greek meal? So for all of that food we paid about thirty Euros. Keep in mind we did eat in a touristy zone and if you’re in a more residential area you can maybe expect to pay 20, 25 Euros for that. 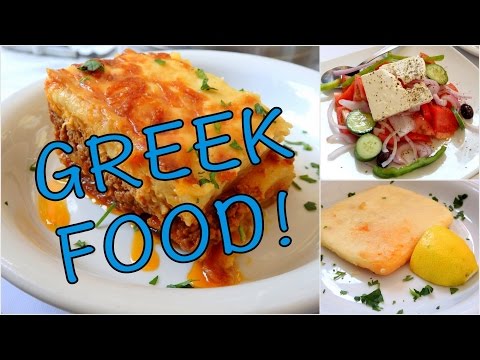