So we spent the night at a pretty cool place last night. We are at the Feynan Eco Lodge and we had to drive three and a half hours to get here. The last thirty minutes were actually spent in the back of a pickup truck because we’re in the middle of nowhere and we had to use dirt roads to get here.
Meow Meow!
Two of you. I fed one of you last night. I think I fed you.

So it was a very pleasant surprise waking up this morning because when we arrived last night it was already dark and place was only lit by candle light, so we kind of had an idea of what the hotel looked like but we weren’t really certain and now this morning the views are amazing and the building itself is quite spectacular.
The hotel employs a Bedouin community and benefits over eighty families and four hundred people.

So like I mentioned before the hotel uses candle light to light the rooms, the dining area and the lobby but they do also have solar panels which you can see over on the mountain and those are used to produce electricity for the bathrooms. That is the only place where you have a light switch.

Goats running sounds.
We’ve been greeted by a stampede of goats and kittens for breakfast. Hahahaha 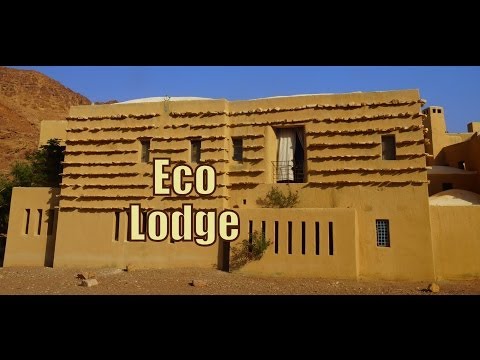