While in Finland we planned on doing a Finnish candy taste test including sampling Finnish chocolate, Finnish licorice and Finnish Salmiakki; however, we completely ran out of time. After raiding a Finnish supermarket we stocked up on as many products as we could and stuffed them into our already tightly packed suitcases to try back home in Canada.

One of the things to do in Finland is to experience Finnish culture by sampling its wide range of cuisine and snack foods (junk food).

For the most part we found all of these Finnish treats to be especially delicious; however, Audrey thought the licorice and Salmiakki were disgusting – an opinion shared by my foreigners.

Overall, this is the complete list of Finnish food products we sampled:

We were hoping to do a Finnish chocolates and candy bar while we were in Finland but unfortunately we ran out of time. So we’re now back at home in Canada and we’re just sitting in my backyard and today we are going to be taste testing all of this candy. It should be a fun afternoon.

And we’ve got Max, the dog, to join us. Max, do you want chocolate? Chocolates!

First off we are starting with this little Jim bar. And we’ve never had this one before. No, let’s see what it tastes like. It is very small. For a healthy snack. Mmmm.

Oh, it is white inside. It has a very fruity flavor but I can’t really make out what kinds of fruit are in here. Banana, perhaps? It is really nice. I like it.

Okay, so I’m a huge fan of licorice and I’ve had a lot of Salmiakki since I’ve been in Finland but this is something I’ve never tried. This is called Lakupala and it is Tropico. Apparently, there is dark chocolate, orange, berries and possibly pineapple. So I have a feeling this is going to be sweet liquorice. I have no idea. I’m opening it up. You can see the different colors. So here is one that is white. Let’s guess the flavors. Okay.

So without looking at the bag, what do you think that one is? I think that is pineapple. And it is really sweet. This is definitely candy kind of licorice with a lot of sugar but I like it.

Audrey hates licorice but maybe we can finally find something that she likes. Maybe this fruit flavored licorice will win her over. Okay, I’m purposely going to choose the red berries because I like berry flavored stuff, so maybe I’ll be able to enjoy this.

Did you spit it out? Uhhhh.

And no more licorice for Audrey. That would just be cruel for me to force her to try more of it – especially the Salmiakki.

Okay, so next up for me is the Tupla bar. Also, this is a bar we’ve never had as well.

So I was reading up on this chocolate bar and apparently Tupla means double because you get two little bars inside of the package. This one looks like it got a little bit crushed.

Okay, so it is milk chocolate and nuts on the exterior. And then I think the filling might be nougat. It is kind of chewy and very sugary. Yeah, I do like this one. It is really nice.

Before we became travel bloggers and started making YouTube travel and food videos, we used to teach English in South Korea. And our students were obsessed with Angry Birds. Like they just loved that game.

Angry birds originated from Finland and they have a little candy bar here. I think it might be licorice. Let’s show us the Angry bird. It is a yellow Angry Bird. There they are. It looks quite angry doesn’t it?

Indeed, it is licorice and it appears to be filled with something.

Okay, yeah, it is a very sugary licorice that I’m sure kids would love. And yes it is pineapple flavored inside. Kids and Sam love it.

Here I have Moomin gummy bears. So if you’re not too familiar with Moomins, they’re actually characters from a Finnish fairy tale and they kind of look like Hippos, right? I think it looks like a hippo, yeah. They’re just big plump, white creatures and while we were in Helsinki they were celebrating the one hundredth anniversary of the creator of the Moomins, so Moomins were all over the city.

These are gummy’s. Let’s see. Are they shaped like Moomin? Yeah, let’s see. This one looks like a Moomin. And there is some people in there as well. I’m not sure what the story is with these guys but they must all be characters. I’ll try this one.

Mmmm. Maybe apple? Is it sweet? Yeah. These are really good. I think I’ll be keeping these for myself since I don’t like the licorice, I won’t share these.

No Finnish taste test video would be complete without testing Salmiakki. This is a treat that is absolutely adored in Finland but a lot of foreigners don’t like it. It is extremely salty. It is made with Ammonium Chloride. It is like a black type of licorice except it is so much saltier than any kind of licorice I’ve ever had. I love it. Audrey really doesn’t like it, so I’m not forcing her to have any.

And I’m just going to show you what it looks like. Now, this is one kind of Salmiakki you can get. These are the smaller ones and they are kind of harder candies. So you just them in your mouth and you suck on them. Mmmmm.

So next up we have some Jenkki spearmint gum. So I actually have a few Finnish Canadian friends and whenever they come back from Finland this is what they bring back. I’ve actually had this several times before in Canada.

Let’s see. But I like it, so I’m happy to try it again for the video.

Jenkki! Let’s see what it looks like. It’s gum.

It tastes like your average gum. It’s not a super overpowering flavor like some of the Excel gums but yeah this one is nice.

Aside from Salmiakki, my next favorite Finnish food is Karl Fazer chocolate. And this is just amazing high quality chocolate. I think this one we have here is just the plan milk chocolate one.

This is your standard Karl Fazer chocolate bar. And I recommend if you’re going to eat this get the big bar. This is just the little tiny one. Those big massive 200 gram bars – those are the best.

Here is a unique one. While we were in the supermarket looking for different chocolate bars we could try we came across Karl Fazer bar but as you can see over here this one is Chili and Crisps. So I’ve never had chocolate with chili before. We’ll what that actually tastes like. I’m expecting to like it. I wonder if it is spicy or not? Yeah. It’ll be interesting to see. I hope it is not too too spicy. Hopefully you won’t spit it out like the licorice.

I mean it must be a good combination for Karl Fazer to produce this. I’m still not tasting the chili. Are you biting into it? Um hmm.

I’m waiting for it to kick in.

There is something crunchy in there for sure. Okay, actually when you swallow the chocolate there is a slight burn in your throat. I think there is a chili. I’m going to let you try it and see what you think.

Alright, I’m going to have two pieces here to try and make sure we can find that chili inside.

Yeah, you’re right. It is not initially spicy. It does have that crunch though. I think you’ll feel it when you swallow the chocolate. Tell me how that feels.

I’m very excited about the licorice all sorts. I grew up eating these in Canada, so I wonder if they taste the same or not.

Alright, and so with the all sorts it really is just a whole bunch of different licorice candies. So I’m just going to hold them out in my hand as you can see here. These yellow ones tend to be sweeter.

Let’s see how this tastes. Mmm.

Let’s try one of each in the name of research.

Yeah, that is very sweet.

What is the yellow one flavored like? They are not actually flavored like the colors that they are. They’re just kind of sweet.

Alright, one more. Yeah, those are really good. I mean they’re just as good as any of the ones I’ve tried in Canada and I can tell that these are ones are really fresh, so I like them a lot.

And I saved one of my favorites for last – this is the Geisha chocolate bar which is also produced by Karl Fazer. Let’s try this. I wish Karl Fazer would make his way over to Canada. I know. We really need him over here. Mmmm.

That is really nice. So yeah, this one is a milk chocolate and it has a creamy hazelnut filling. Perfection. It is my favorite one, so I’m always happy to eat a Geisha bar.

So that concludes our Finnish taste test. Let us know if you’ve tried any Finnish chocolates, licorice, gummy bears or Salmiakki. We’re curious to know. 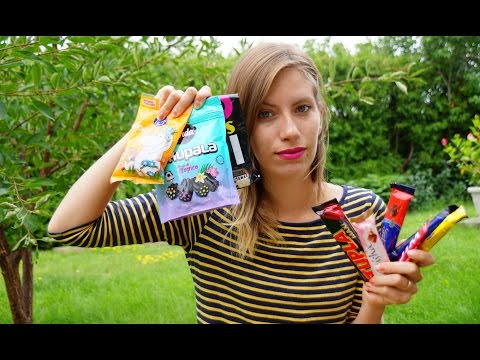