If you have trouble viewing this video click here: http://youtu.be/ML9hKmn3-Ww

Viva Las Vegas baby! After weeks on end of cold harsh weather in Canada, we had the opportunity to escape to Las Vegas for the weekend. Trading in our parkas for t-shirts was a welcome change. The glitz, the sights and the sounds of the city quickly had us mesmerized. We spent the majority of our first day in Las Vegas, Nevada familiarizing ourselves with The Strip walking along snapping photos and video of the various architecture, hotels, casinos and fascinating shops. In particular, we made stops at Hershey’s Chocolate Store and the Mandarin Oriental Palace Hotel. From Castles to the Eiffel Tower our senses were overloaded from the minute we arrived. Even the airport has dinging slot machines! The following travel video is our first impressions in Las Vegas featuring things to do and attractions worth checking out.

So we aren’t in Canada no more! This weekend we actually escaped to Las Vegas so we are going to be spending three days just enjoying winter in the desert and doing cool stuff. And today we’re walking down the strip and we’re going to show you some of the sights. And the best part – no winter parka right now.

Enough walking for a while. I’m starving. Let’s get some dinner. We’re going to Shake Shack.

So when this buzzer goes it’s time for me to get my food.

I think I found my new favorite burger here at the Shake Shack.

They just do their patties to perfection over here.

Tell, me. Tell, me! You know what? Nobody does fast food like Americans. They’ve got it down to a science. It’s absolutely unhealthy but so delicious.

We just found a jelly bean Statue of Liberty and I’m going to dare Sam five bucks to lick it.

This is like Charlie in the Chocolate Factory. This is a very volatile situation. I’m walking into a Hershey’s candy store. Ooh la lah. I hope they have free samples.

I think I’m about to create my own chocolate bar. Ooh.

I don’t know how this works actually.

What did you find there?

Two and a half pounds of peanut butter and chocolate. And these are only two cups if you can imagine. One here, one there.

So what did you find? I found the largest Hershey chocolate bar in the world. Really?

We’re going to head back to the hotel and get ready for a show. We’re going to be seeing the Michael Jackson Show at the Mandalay Bay but unfortunately we can’t bring any cameras in there so we won’ t be able to show you that but maybe after the show we’ll hit the town again and show you the sights. Not maybe! Definitely! 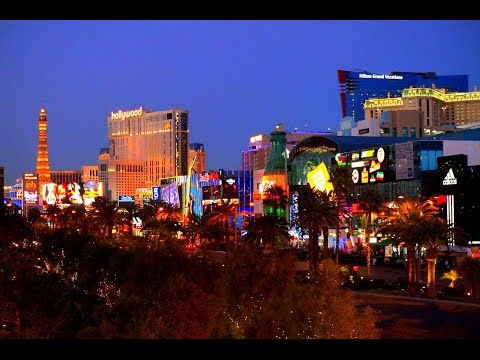