After a long trip starting in Bangkok, Thailand we finally arrived in Helsinki, Finland where we discuss our first impressions of the city/country on the very first day of our travel schedule in Europe.

Our nearly 24 hour journey from Bangkok to Helsinki (including a stopover in Istanbul, Turkey) had us feeling worn out and knackered; however, our initial excitement of being in Finland for the first time, ensured we only had a brief nap before we set out on foot to explore the city.

Before we did any sightseeing we first stopped off at a local grocery store to grab a do it yourself kind of picnic dinner we could eat in the park. As we browsed through the grocery store we certainly recognized we weren’t in Thailand anymore, when it came to the prices and selection of food. Instead of instant noodles, rice and pao we noticed a delectable selection of smoked fish, cheeses and rye bread all at prices that were astronomically higher than in Chiang Mai.

Prior to arriving in Finland, we realized we’d have to pay more out of pocket for things such as accommodations and food; apparently, only Norway is a more expensive place to travel in Europe. However, to be perfectly honest, I’ve so far been surprised that things aren’t as expensive as what I initially planned for. For example, the meal we ended up purchasing (for the two of us) came to just over 10 Euros and included a generous portion of smoked salmon, a medium sized sandwich and a Greek salad with feta cheese. If we were to eat at a restaurant we’d surely pay a lot more for food; one of strategies for our time in Europe is to alternate between market/street food and proper sit down down restaurants. We’re going to try and have as much market, grocery store and street food as we possibly can.

As we ate the food in the park, we quickly noticed we had a few uninvited guests joining us. A few pieces of our cheese and salad had fallen to the ground and a few little birds were boldly coming up close to us to grab a few nibbles before flying off.

The meal itself was a delicious feast; we both especially loved the smoked salmon and Greek salad. After satisfying our bellies we started to explore more around the city.

What we noticed immediately was that compared to Asia the pace of life is slower, the streets are cleaner and noises/odors are far less pronounced. This hardly comes as a surprise though because I’ve been dealing with this kind of reverse culture shock whenever I’ve gone back home to Canada from teaching/backpacking assignments in Asia.

We also noticed how pedestrian friendly the streets were for those covering it on foot or by bicycle. With dedicated bicycle lanes and generously sized sidewalks, it seemed more people were either on their bikes or walking than there were cars on the road. Once again, this was such a welcome change from Asia where hustle and bustle is the name of the game. We noticed that Finnish people appear to be very health conscious in terms of exercise and cuisine. Aside from inline skaters and those riding a bike, we noticed a lot of people jogging as well. Inside of grocery stores are a number of health and fitness related snacks including energy bars and sports drinks.

We stumbled upon a grocery store where food items were displayed in a flyer like poster on the wall outside. Apparently, for those short on time, food items can be purchased by scanning your cellphone over the bar code of select items, which in turn are delivered to your home. How convenient!

Although we only ended up just scratching the surface of Helsinki, on our first day of travel, our overall impression was overwhelming positive. We can’t wait to explore more of the architecture, cathedrals and sample more Finnish foods (including reindeer) over the next few days. 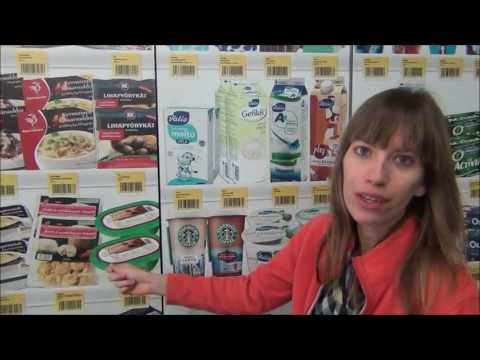