On our very first day exploring Sofia, Bulgaria we encounter many street performers, a mob of football fans and an angry looking guard.

Bulgaria is a country we visited on a whim.

Having already spent nearly 10 days in Istanbul, Turkey we had just under a week before my Mom arrived.

While sitting down and exploring different options to consider (including traveling more in Turkey) we decided to hop on an overnight train bound for Sofia.

Sometimes visiting a destination without much prior research is rather refreshing.

You visit a place with a fresh set of eyes and very few (if any) preconceived expectations.

Our first day exploring Sofia was full of quirky surprises and random encounters.

I couldn’t believe the amount of street performers we noticed while randomly roaming around the downtown core.

From male singers belting out throaty tunes to grown adults dressed up as birds on stilts, it was certainly an eclectic combination of performers.

One of my personal favorites was a man wearing a formal suit without a head. Audrey had fun posing with him hamming it up for the camera and camcorder.

As we continued to randomly wander around (we originally started out with a free walking tour but we quickly decided we’d rather do our own thing) we noticed a loud noise coming from a distance.

At first, I thought it was some kind of political rally as I heard sounds of bangs, shouts and random explosions

However, as the mob drew closer I noticed it appeared to be peaceful.

Young men with shaved heads hollered in excitement as they saluted in the air.

It appeared this was some kind of a skinhead Neo-Nazi rally.

Suddenly it dawned upon me that this was most likely a football celebration, which I later was able to confirm.

Irregardless, it was exhilarating (and also scary) to suddenly be caught up in it all.

As if our day wasn’t filled with enough random moments, the funniest encounter was still yet to come.

As I stood from a distance, I used my tiny camcorder to zoom into his face.

With a scowl reminiscent to the wicked witch’s guards in the Movie Wizard of Oz, his shifty eyes moved from side to side.

This was hardly the stoic representation of the typical guards I’m used to seeing in Canada or England.

Overall, what a day. From quirky performances to mobs to disgruntled guards, Sofia certainly left a distinct first impression upon me that I’m sure I won’t forget anytime soon. 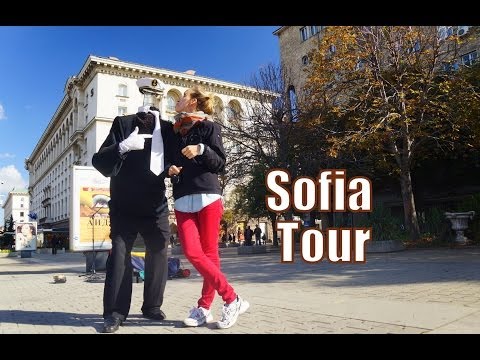