If you have trouble viewing this video click here: http://youtu.be/tE_U_07RcK4

It’s not easy to beat the heat while staying in Madrid during the scorching summer months. One way you can do it though is by having cold Spanish soup. In this video we take on two of the most refreshing and popular chilled soups found in Spain and taste them head to head. It’s Gazpacho vs Salmorejo. Come find out the similarities and differences between the two.

So it is three thirty PM in Madrid, which means it is lunch time. So we’re outside at a little patio right across from our hotel. And we’re going to be doing a battle of the soups. We plan on trying two different soups that are from the region of Córdoba, Andalusia in southern Spain. And they are called Gazpacho and Salmorejo. And there is some similarities and some differences between these two cold soups, so we’re going to be showing you what those are.

So our two soups have arrived. I’m having Gazpacho, Sam is having Salmorejo. And at first glance they do look quite similar. The same color because it is a tomato base but the topping is a little bit different. Now we’re going to be actually tasting them and telling you about the ingedients and what sets these two apart.

Okay, so time for the first spoonful of Gazpacho.

That is so good. It is tangy because of the tomato. It is served cold so it is really refreshing. And this one has a lot more ingredients than Salmorejo. So I just put in some chopped bell peppers, green and red peppers. It has also got a bit of onions in there. And it was drizzled with olive oil on top. So a great combination on a hot summer day. I’m just going to keep enjoying this over here.

It is so good.

So two more things I’ll mention about Gazpacho. If you don’t want like a full bowl of soup you can actually get it as a drink in a glass and that is cheaper because it is a smaller portion. And also Spanish Gazpacho is really different from Moroccan Gazpacho, which is what I was used to. The Moroccan recipe has chickpeas and beans so don’t be surprised if you come to Spain and there are no chickpeas in your Gazpacho.

And Gazpacho also comes with a basket of bread on the side. So if you don’t want to drink it like a soup you can just dip some bread in there. And almost treat it like a dip.

And you are having Salmorejo. Tell us what that is like?

And that is a little bit different than the Gazpacho. If you look down here you can see that it is a thicker tomato puree. So basically it is thicker. And you’ll also notice that there is some egg here. So I’m going to have the first bite to see what it tastes like. You have some egg, ham and olive oil as your toppings.

Yeah, it is almost a bit more like a cold stew than a soup. It is definitely thicker. I really like the taste. I like the olive oil drizzled on top too. It just. It is a really awesome dish to have in the summer to cool down.

And apparently there is a mystery ingredient here. What is it? Yeah, there is something cool that we discovered upon research. And that is that stale bread is in both of these. In both of these soups. So they soak it in water and then just mix it in with the Gazpacho and the Salmorejo. But you wouldn’t be able to tell at first glance.

And price point for this meal. So as an appetizer here in Madrid you can pick one up for about five Euros. Or if you want the smaller portion you can get it in a glass for about two to three Euros. Two fifty usually. 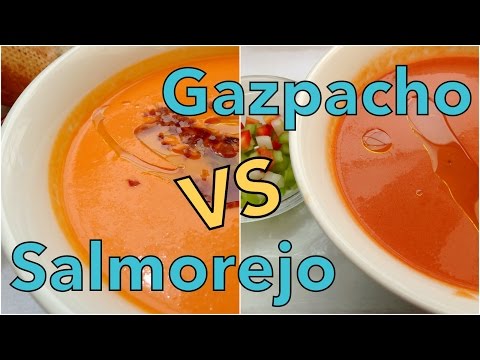