I’ve often found I can gain as much insight into a nation/culture by its breakfast than just about anything else. Considered the most important meal by many, I’ve slurped noodles in Vietnam, ate rice in Korea and devoured hummus in Jordan. Coming to Germany was an opportunity for me to try eating authentic Frühstück (German: breakfast) with an ample spread of breads, toast, cold cuts, cheese, jams, honey, eggs, coffees and teas.

In Asia I’ve got used to eating a smaller breakfast – a noodle dish, a bowl of rice, a slice of toast or a few bites of dim sum – but here in Berlin breakfast is a hearty affair.

When I’ve ate a proper German breakfast in the morning, I typically have a later lunch (or none at all). I’ve found the extra food in the morning has helped sustain me throughout the day and I typically no longer require an afternoon nap – although that may be more due to the fact the weather isn’t hot, humid and sticky every single day (as it was in Southeast Asia).

As someone who appreciates fine cuts of meats and cheeses, I’m hooked. Watch the following video above to get a better idea of what we have for breakfast most mornings at our apartment in Berlin.

Since we’re hanging out in Germany these days we thought we would show you what a German breakfast looks like. We’ve setup the table and as you can see it consists of a lot of different breads – like we have a few buns here – and also meats. Germans like to have salami, ham and just different deli cuts for breakfast. We also have a few different cheeses, smoked salmon and – of course- you can’t forget Muesli.

It has been a very nice change in diet since we left Asia. Yeah, I’d say. It is quite the feast I must say as well. This is a completely different type of meal from what we were having in Asia. Most of the time in Asia we would have meals and breakfasts consisting of rice, noodle dishes and sometimes dim sum. This is a much heartier type of meal.

One of the big changes since leaving Asia is that we’re actually eating all of our breakfasts at home at the kitchen table. Whereas in Asia we were often going to a little market or like little street stalls where they prepare the food in front of us. In a way it is kind of nice just rolling out of bed in your pajamas and being able to eat at home without having to get dressed. With your bed hair and everything.

Anyways, enough talking. It is time to dig in. Yes.

That concludes breakfast. We certainly took care of things and now we just have empty plates in front of us. And a whole lot of dish washing to do. 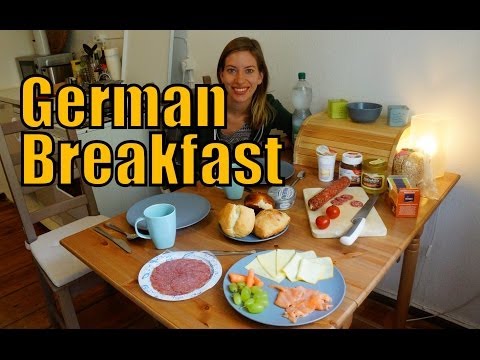