If you have trouble viewing this video click here: http://youtu.be/DOuI9_jgbIo

Having spent significant time in both Dublin and Belfast it was time for a road trip to visit Giant’s Causeway in Northern Ireland. Although the weather was nice when we left Belfast it didn’t take long for it to change into the more typical overcast day with intermittent rain. Along the way we stopped for lunch in Ballycastle where we devoured some fish and chips, warm soup and a pint of Guinness. After warming up by the fire we finally arrived at Giant’s Causeway (Irish: Clochán an Aifir or Clochán na bhFomhórach) and spent the better part of the day exploring this UNESCO World Heritage Site before heading back to Belfast.

Well good morning from Northern Ireland and today is a road-trip day. We’re actually leaving Belfast behind and we’re going to be driving the Causeway Coastal route and exploring the coast visiting some of the major attractions along there. One of them is Giant’s Causeway and from there we’ll see what else we find. I know there is a distillery, maybe visit some parks.

Yeah, sounds awesome. And we’ve been waiting to do this for a really long time. For us, this is what the real road trip in Ireland looks like.

So let’s hit the road. Yeah!

So the weather has been quite unpredictable. We had blue skies when we left Belfast less than an hour ago and up ahead we are seeing some grey storm clouds. So we’ll see what happens when we actually reach the coast. Hopefully we won’t be needing umbrellas or rain ponchos. This is Ireland, you’ve got to dress for all occasions. Oh, yeah.

So it’s almost lunchtime and we’ve been taking a lot of detours. We still haven’t reached Giant’s Causeway but we’ve reached a little town called Ballycastle. So we’re going to stop here and have some lunch.

Cozy by the fireplace are we. Yeah, just warming up by the fire with a pint of Guinness. I couldn’t be anymore relaxed.

So our food has arrived. I have a tomato basil soup. And Sam. I have a feeling someone is going to have food envy.

I think I am. Look at. That giant fish and chips. Are you going to share? No. What? You’re not going to share with wifey? Probably not.

Something I’m going to really miss from Ireland are these chips that are bigger than my fingers. Giant chips. Oh, yeah.

I need to try at least one of those.

That’s nice and savory with lots of spices. And a little drizzle of olive oil on top. It’s top notch.

Alright, so we’ve finished lunch. We’ve made it back in the car. That means our road trip continues. We’re on the way to Giant’s Causeway. Yeah, I keep calling it the wrong thing. What did I call it before? Like Causeway of Giants. Giant’s Causeway that’s where we are off to and hopefully on the way back to Belfast we’ll have time to hit up a whisky distillery. So it’s going to be a pretty epic day.

So we have just arrived at Giant’s Causeway, one of the wonders of Northern Ireland, and we’re just going to be following the trail all around until we reach these massive pillars that look out of this world. Let’s go.

Giant’s Causeway is a region of roughly 40,000 interlocking basalt columns as a result of an Ancient volcanic eruption. Located along the Northeast coast of Northern Ireland this National Nature Reserve has been named the 4th greatest natural wonder in the United Kingdom and is easily one of the most popular attractions int he country. Legend has it the columns are the remains of a Causeway built by an Irish Giant challenged to a scrap by a Scottish Giant.

How are you enjoying it so far? It’s been fantastic. We’re going the extra distance to get a really nice vantage point. And you know what it’s never crowded along the extra mile.

Lead us that extra mile.

Across the sea you’ll find identical basalt columns at Fingal’s Cave on the Scottish Isle of Staffa.

Many of the structures having been subject to several million years of weathering resemble objects such as Camel’s Hump, Giant’s Boot Structures, Shepherd’s’ Steps and the Organ to name just a few.

And this is where the path officially ends. Unfortunately, they’ve had to put up a barrier because of erosion. And if you look off in the distance there is a massive rock slide and you wouldn’t want to be walking there. Probably not. 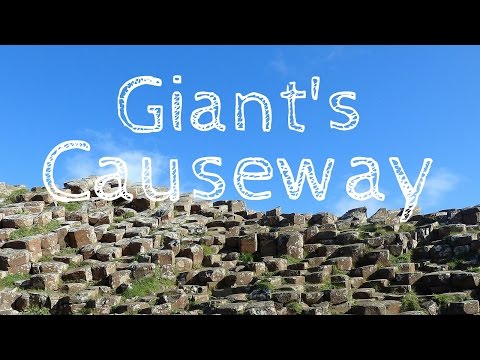