If you have trouble viewing this video click here: http://youtu.be/zvGwILLMOKU

It’s time for another food battle! This time we roam around in Athens, Greece to sample some delicious Greek Street Food. In one corner we have souvlaki pita and in the other gyro pita. Come find out what these two Greek sandwiches are all about in our latest taste test food video.

So the sun is starting to set and dinner time is quickly approaching. We’ve been walking around the Athens flea market and we’ve worked up an appetite so right now we are stopping for some Greek food. We’ve found a little joint that is serving up Pita Souvlaki and Pita Gyro. So we’ve ordered up one of each. Ta da! Doesn’t that look good? So yeah, ready for another taste test in Greece.

What do we call this in Greece vs back at home? Alright, so here’s the deal. Over here it is called Gyros but where I grew up in Canada and also visiting in the US it was called gyro. So it is kind of hard for me to say it as gyros but I’m starting to get used to it. So when you’re in Greece call it the gyros.

So what is fascinating is that gyros means to turn. It is basically rotisserie meat that is cooked on a skewer and you can have all kinds of different things. There is chicken, pork, lamb. So pick whatever you want and it is stuffed inside of a pita.

So enough of me rambling on. Let’s actually try it here. Mmmm.

That’s one of my favorite sandwiches I’ve had in a while. It’s so good. The meat is really tender. I really like the sauce. Tzatziki. Yeah, the tzatziki sauce and you’ve also got a lot of onions and tomatoes too, so really good stuff.

So for mine I got the pita souvlaki. And souvlaki is basically meat on a skewer so it is not shaved meat like Sam’s. So I’ve got nice chunks in there. And also it comes with French fries, onions and tomatoes. And we can’t forget the tzatziki sauce which is made with yogurt, garlic and cucumber. Delicious! So I’m going to have another bite here. We’ve got a quality control bite right now.

So so good guys.

So you polished that off quickly. Yeah, I devoured that. Seriously, that was really fast. In terms of price this is basically the cheapest and most affordable meal that you can get in Greece. And it is so delicious. Where we picked it up here, which is a super touristy area, it was 2 Euros each. The giant ones were 3.50 and if you’re walking down say more of a residential area, somewhere that is not in a touristy zone, you can pick one up in the one to two Euros range. 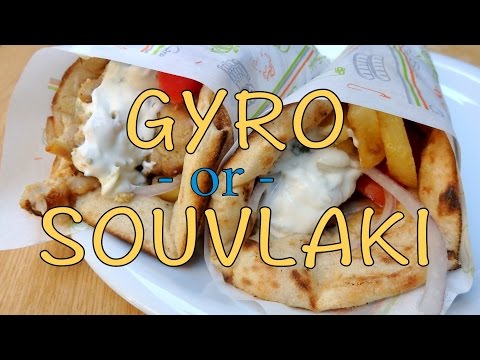