If you have trouble viewing this video click here: http://youtu.be/me38BP_DJnc

There are certain foods that are off-limits to certain people. I totally get that. There is a plethora of reasons why someone may not want to try something: ethics, religion, personal taste.

However, my strategy for embracing a new culture/cuisine is to dive in head first. I tend to check my initial emotions I have towards something with a willingness and openness to trying it at least once.

Enter into this equation guinea pig pizza – known locally as Cuy. This thin sliced pizza didn’t have generous amounts of cheese, sauce or any other topping aside from Cuy.

Audrey decided to sit this one out which was entirely cool. Come watch to find out my reaction to eating a Cuy Pizza slice in Lima, Peru.

Alright, for today’s food video this is going to be one of the more exotic things we’ve tried in Peru – Guinea Pig. Locally it is known as Cuy. And we’ve been showing you a lot of desserts and other types of things but this is something that is widely eaten in Peru and so when you’re in a different country and a different culture my strategy is always just to immerse myself and try everything new that I possibly can.

So, with that in mind, I am going to be trying Guinea Pig in the form of a pizza slice if you can believe it or not.

So here is the big unveil.

I’ll hold that up here. And as you can see this is a pretty minimalistic thin sliced pizza except for the massive Guinea pig meatballs.

Alright, it is time to dig right in. It is time for the first bite and I’m going for a slice of the meatball.

Definitely one of the more interesting pizza’s I’ve ever had before. Usually when I’m even on a meat lover pizza there isn’t pieces of meat this big, so it is going to take me a second to chew it.

You know what that is pretty good. I can tell that this meat has been seasoned a lot. It tastes a little bit like an Italian sausage. But it also has a very game-y flavor which reminds me a little bit of a wild rabbit. For example.

Let’s get another piece of the Cuy. Does it have any bones? It doesn’t, no. But it is very meaty. And what I mean by that is chewy. So, it’s not the kind of thing. It’s not the kind of pizza slice you can just devour when you’re actually taking a bite out of the Guinea Pig. You’ve got to chew it really slowly.

So yeah, that isn’t bad. I would say it is a bit of an acquired taste. I wouldn’t go out of my way to order it again. But I’ve definitely had worse pizza than this. So this isn’t too bad at all.

So a little bit more information about eating Guinea Pigs in Peru. It is traditional Andean food. Typically, the Guinea Pig, the Cuy, is skewered on a spit. And when it is served on a plate typically it is its entire body. It has its head still intact. 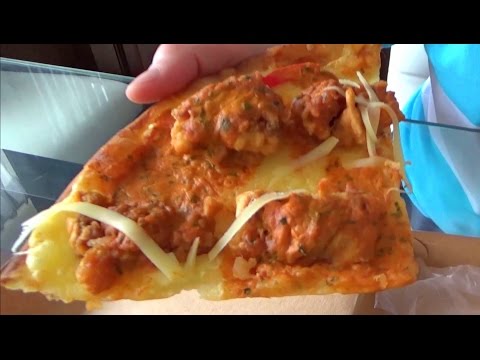