On our second day exploring Helsinki, Finland we give you a tour around the city with some suggested things to do in the downtown area along with a visit to Market Square to sample some Finnish food including Reindeer meatballs, grilled Salmon, potatoes, vegetables and garlic sauce.

Our second day started bright and early as we started exploring Helsinki on foot soon after waking up and eating breakfast. The cool breeze in the morning and lower temperatures made for ideal walking conditions; although, I’m sure Audrey would argue that point, as prefers warmer weather whereas I’m in my element when temperatures are hovering around twenty degrees of less 😉

We couldn’t help but notice how quiet and empty the streets were this early in the morning. We could sometimes go an entire block or two with seeing a single other person. On our way to visit Uspenski Orthodox Cathedral, we noticed a park dedicated for dogs and their owners; naturally, as pet lovers, we went to check it out but the dogs weren’t as pleased by our presence. This distinct landmark cathedral offers a fantastic vantage point overlooking downtown Helsinki.

From the cathedral we continued to the main train station where we would be meeting one of Audrey’s Canadian friends from back home who is studying nursing in Finland. Along the way we walked by several stores selling Finnish souvenirs; several groups of performers entertained pedestrians including a a group busking.

Soon after meeting Audrey’s friend, our focus shifted towards Finnish cuisine. Specifically we wanted to try eating Finnish Reindeer meatballs. As we approached Market Square, we noticed a change in atmosphere much different from the quiet neighborhood nearby our hotel. Finnish vendors were selling everything from trinkets to local delicacies. Meanwhile, a sea of people made their way up and down the rows gobbling up delectable delights, shopping and sitting down for coffee. Although the pace was definitely lively it was nowhere near as chaotic as some of the markets we’ve visited in Asia, such as Jonker Street Night Market in Malacca or the Shilin Market in Taipei.

We finally found a specific stall specializing in Reindeer meatballs. After placing an order, we couldn’t help but notice how enormous the meatballs actually were. These things were huge! Think gigantic! These were literally the biggest meatballs we had ever seen. To go along with the meatballs, a generous portion of round potatoes were included along with a side of greens smothered in a creamy garlic sauce.

How did the Reindeer meatballs taste? Well, they weren’t nearly as distinct as they thought they would be. I have a lot of experience eating animal meat such as deer, elk and moose having grown up on Vancouver Island. I was expecting the Reindeer to have more of a pronounced and unique taste; however, it was rather nondescript, at least in the form of these meatballs, and I wouldn’t have been surprised if somebody told me these were pork or chicken balls. I’m hoping to soon try Reindeer steak which I think may have more of a unique flavor.

Finally, we ended up coming back to Market Square for dinner where we ended up having the same thing; except this time we replaced the Reindeer meatballs with grilled salmon. If I had to choose between the two, the salmon would win hands down. I’m a huge salmon lover (it’s probably one of my top 5 favorite foods) and this was grilled to perfection with each piece melting in my mouth.

Overall, our second day in Helsinki was very pleasant. Our plan is to do a bit of island hopping tomorrow along with a day trip to Tallinn, Estonia the following day. Although we don’t actually have a lot of time left in Helsinki, I’m sure we’ll make the most of it gormandizing on more salmon and hopefully some reindeer steak. 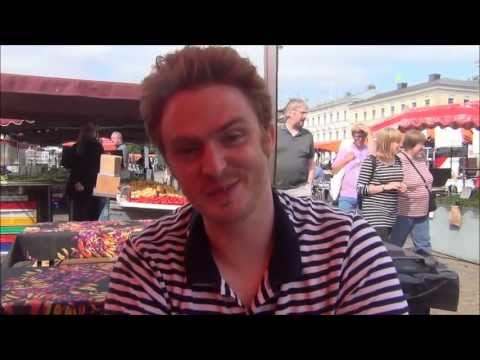