If you have trouble viewing this video click here: http://youtu.be/jr56szPdWvw

Our second stop on our Busabout adventure was in the Belgian city of Bruges. Having recently watched the movie ‘In Bruges’ starring Colin Farrell we were both eager to see what the city was all about. In the movie Bruges is described as not the most endearing city by Ray: “Ken, I grew up in Dublin. I love Dublin. If I’d grown up on a farm, and was retarded, Bruges might impress me. But I didn’t, so it doesn’t!” However, the irony is that you won’t find too many cities, even in Europe, that are as cute and architecturally as impressive as Brugge. Come join us as we munch down on Belgian fries, chocolate and waffles as we discover the city by foot and by boat on the canals. We also show you what a night out on the town looks like. We’re confident that after watching this you’ll have a better opinion than Ray (Farrell) did of the city 😉

After leaving Paris, our next stop with Busabout was Bruges. However, en route to our destination we made a surprise stop at Vimy Ridge. The Battle of Vimy Ridge was fought during the First World War, where Canadian troops played an important role in capturing German-held ground. Today there’s a memorial with a statue of Mother Canada weeping over the lost soldiers.

Well, Hello and welcome to Brugge! We are excited to explore the city. We just got here in the afternoon. The light is perfect, the day is beautiful and we’re going to go explore and see what the city is all about.

Once in Bruges we set off to see the Old Town. We watched horse-drawn carriages roll down the square, admired the buildings, and visited chocolate shops because if there’s one thing you have to do in Belgium, it’s sample all their delicious chocolate.

So good morning. It is the start of day 2 here in Bruges, so we’re going to continue sightseeing. I think the first order of business is to try and find a boat so we can take a little tour down the canals and maybe after that we’ll start thinking about food. I know there is a few Belgian dishes that we’re itching to try so let’s get started with the day.

We started off the morning with a cruise down the canals. Like many cities in Europe, Bruges too has earned the nickname ‘The Venice of the North‘ due to the numerous waterways that run through the city. It was a great way to get a closer look at the city, and it didn’t hurt that we had swans to keep us company.

The boat trip helped build up our appetite, so our next logical stop was a little shop specializing in fries. The Belgians assert that they invented fries and not the French, so we ordered a plateful with mayonnaise and curry ketchup.

After eating lunch, we continued exploring the town on foot, and then it was time for dessert.

Waffles, waffles! We are having waffles.

What do you get when you have a major sweet tooth, if not Belgian waffles doused in chocolate syrup and whipped cream. Delicious!

So this is completely unplanned but we just found out we are in town during this crazy music and dance festival. So we’ve been handed a flier and there is a whole bunch of different workshops happening. You can learn to break-dance, dance the Charleston. You can go to different concerts. So we’re going to be spending the evening here in the town just checking it out and visiting the various stages.

The Benenwerk Festival was the best surprise of them all! The silent disco was our personal favourite. Everyone wore headphones and there were 2 dueling DJs so you could switch frequencies and decide who you wanted to listen to. After showing off our best dance moves, aherm, we spent the rest of the evening checking out the different stages at the festival.

So there has been a lot of dancing involved in the last hour, so now it is time to cool down with our first Belgian beer. Beer o’clock! Cheers! Woo!

And that’s a wrap for our short but sweet visit to Bruges. Next up: Amsterdam! 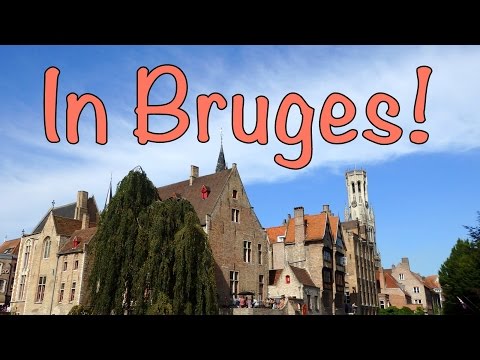