So today is our first morning in Israel. It is our first time in the Middle East and we’re super excited. And to start things off we’re going to be doing a food tour around Jaffa. Where we’re just going to try lots of traditional Israeli dishes. Now Sam and I aren’t very familiar with Israeli food. Like we know Hummus and Shakshouka. And baklava. So we’re excited to try some new dishes and see what we like and see what we don’t like. So enjoy!
Jews and Muslims argue over the best hummus. He’s Muslim. I think he’s making a great hummus. But don’t quote me. Don’t quote me. How to buy hummus. So I’m going to do. I’m going to be lucky. I’m going to do the first one. Okay. So there is a few methods. We can argue on that. But basically that’s what I do. Don’t kill me in here. I do this. You basically do this. You just. Sorry, I’m not going to be very methodical. Mmmmm, that’s good. That’s how I eat it as well. It’s so tasty. Happy dance at the end.
So hummus taste test. I love hummus. I’m know I’m going to like this. Do you like spicy food?
Big massive amounts of it.
How is that? Hummus in Israel?
We believe in double dipping in Israel, okay?
So much flavor. Wow! Wonderful 🙂
And you’re allowed to double dip I just heard. Even better!
I’m going to grab a big chunk. Some chickpeas in there. No holding back.
MMMM, yeah. Isn’t that good? Isn’t that amazing?
It’s really creamy and smooth. I’m going to double dip.
Breaking bread. So what are you going to be trying? We’re trying Shakshouka next. It’s a mixture of tomatoes, peppers and some egg. So let’s have a taste. I’m not entirely sure how to do this.
Just dip it! Grab some. There you go. This is hot.
I’m going to burn myself.
Mmmmm, how is it? That’s some tomatoe-ey goodness! That’s really nice.
Okay, say couscous taste test. Lots of vegetables. It’s really good and light. Also very flavorful as well.

Looks like a pastry stuffed with cheese and some sesame seeds on top. It’s super hot. Owe! You can kind of see the cheese there. Mmmmm. Oh yeah, you can.
I really like the cheese. Is it salty? It is salty. I don’t know if it is feta or what. Cottage cheese? Either way it’s really good.
Alright, so I am trying something called malabi. It’s a dessert.
It’s sweet like a pudding but it’s consistency is a bit like jello. really delicious. Really really sweet. It has a syrup and sugar on top. Yeah, it’s really really sweet.
With shredded coconut.
Really? More dessert? This is so good. So you are having? kanafeh. It’s warm. like a pudding. With sugary hairs on the outside. I don’t even know how to describe it. It’s just really nice.
So the food tour was amazing. We got to try so many different kinds of foods. We were actually full early on but the food was just so good that we kept eating, eating and eating. And I got introduced to some new kinds of desserts that I had never tried before they were really sweet and really delicious. 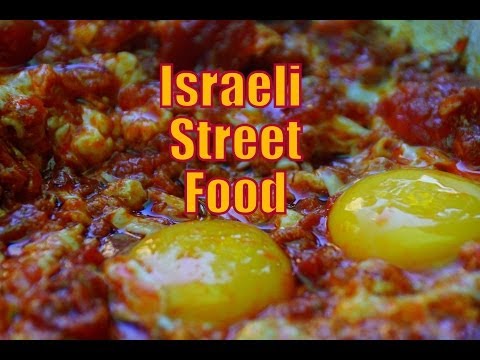