If you have trouble viewing this video click here: http://youtu.be/wcFtjNNo2D8

It’s not everyday that you get to dress up like Kings and Queens while touring a castle. While visiting Cavernago, Bergamo we had a chance to do just that along with learning how to make traditional Italian cuisine. Our first order of business was preparing lunch, so we headed into the kitchen for our Italian cooking class.

Our lesson consisted of making a full course meal including pumpkin ravioli, steak tartare and tiramisu for dessert. Everything was made from scratch, including the pasta, which gave us a new-found appreciation for the amount of preparation that goes into making high quality Italian cuisine. After devouring our Italian creations we toured Castello di Malpaga (Malpaga Castle) all decked out in fancy attire. It was the perfect way to end what was an incredibly fun day.

Okay guys, so I’m pretty excited about today. We have left Bergamo behind and we’re visiting a castle outside in the countryside. It’s called Castello di Malpaga and we are going to be taking a cooking class inside a castle. So I’m going to get ready to start cooking and Sam is going to give you a tour of the castle so you can see what it looks like.

So this is a family owned castle. It dates back to the 13th Century. Let me give you a tour.

The first lesson of the day was to focus on dishes that take the longest to prepare, so we got started with dessert- a delicious tiramisu with a modern twist!

So I’m taking a quick break from the kitchen to tell you today’s menu. We are going to be preparing beef tartare as an entree, ravioli for the main course and then tiramisu for dessert. So it should be very tasty. Let’s get back to the kitchen and let’s keep cooking.

For our main dish we prepared ravioli, and because this is Italy the dough had to be made from scratch. There were no shortcuts here and everyone was put to work kneading and then rolling out the dough into thin layers.

What are we doing over here? Rolling some pasta. It requires a lot of muscle work. More muscle than I have.

Preparing the stuffing was next. We went with a vegetarian option, which was pumpkin.

Once again, we took no shortcuts here. Pumpkins were chopped, peeled, and then boiled, before being pressed into a paste that we used as our filling.

The last dish of the day was beef tartare. I skipped out since it’s not to my taste, but I was told it was very tasty.

So we have now finished preparing our three course meal and we’re going to go have lunch inside the feast hall which has painted frescoes that are just beautiful. So let’s go in.

How is the food so far? It is delicious because I prepared it myself.

I hardly did any work actually. The truth comes out.

And now that lunch is over we get to play dress-up. Let me lead you around my castle.

I am Queen of this kingdom.

Once we had eaten lunch, it was finally time to tour the castle – a very exciting prospect, especially when you’re dressed in Renaissance costumes. We paraded around like kings and queens, and then explored the former home of Bartolomeo Colleoni, who was captain-general of the Republic of Venice and earned quite the reputation battling neighbouring city-states.

So I had a lot of fun cooking, eating and playing king for a day in a castle but unfortunately all good things come to an end and it is time for us to go back to Milan. 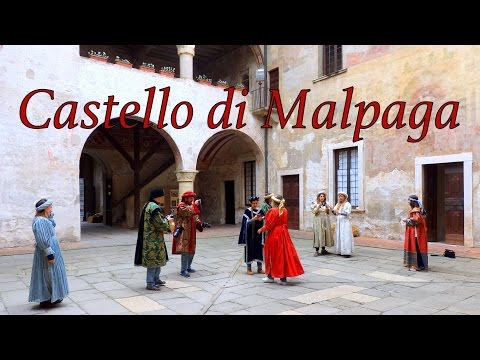