In this travel we dine at a Korean restaurant specializing in dishes served with duck.  Having duck for dinner is not typically on the menu at most Korean restaurants.  In fact, it’s only at specialty restaurants where you can easily try this.  The typical Korean meat dishes such as chicken and pork can be found everywhere in all kinds of different forms.  Duck, on the other hand is definitely a bit exotic in Korea, joining the ranks of dog meat, octopus and squid.

To get to this restaurant we had to walk all the way to Pyeongtaek University which is where we witnessed Psy’s Gangnam style and group dancing/stretching.  As we entered the tradtional sit down restaurant we realized we were the only foreigners here.  After looking at the menu, we decided on the highly affordable Korean duck soup / stew known in Korean as Oritang (오리탕) at a local Pyeongtaek restaurant in South Korea. It was our first time to try duck in Korea.

We had both previously tried duck at Chinese restaurants back home in Canada but not in Korea. Overall, the meal was excellent. The soup was very hearty with lots of fresh vegetables with a thinks and spicy base. The duck itself, was tender in certain areas but quite fatty around the perimeter.  In our opinion, it’s the perfect hearty meal on a colder fall or winter day in Korea.

We had a lot of banchan (side dishes), including some of our favourites such as kimchi. Overall, the meal came to 6000W each (12,000W) in total which is just over $10 USD for the delicious Korean duck feast! 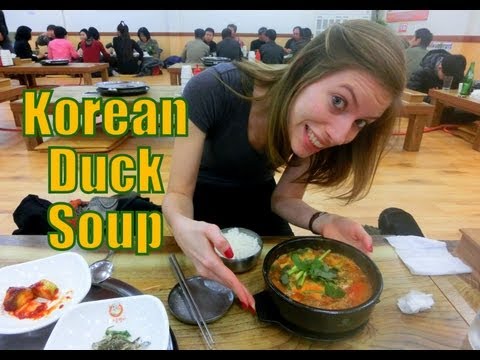