In this travel video we (Samuel & Audrey) visit the Korean Folk Village (한국 민속촌) located in Yongin, Korea to absorb some traditional Korean culture, performances and customs.  The Folk Village is not far from Audrey’s Korean apartment; however, we’ve put off coming here long enough that if waited any any longer the weather would have been too cold.

We first check out a tightrope performances where an elderly Korean man performs impressive students and acrobatics; it’s truly marvelous he’s as athletic and nimble at his age. We then hustle off to watch an impressive equestrian performances featuring jumps, whips, leaps, stunts and more from Korean performers of all ages; however, not before a Korean Folk Village rendition of Psy’s Gangnam Style.  I actually recognize some of the performers from several years ago when I first visited the Korean Folk Village with my father. Afterwards, we check out a Korean traditional wedding featuring traditional clothing and Hanbok.  At the end of the wedding performers wearing traditional Hanbok pose for tourists to take a picture.

Once the performances are over we find ourselves with a lot more free time to roam around. We both marvel at the lovely colours of fall as seen in the colourful leaves. We enjoy snacking on Korean rice cakes and Yeot (a sticky rice taffy made of natural ingredients like pumpkin). We visit some traditional Korean homes including a scholars house. We cross numerous types of bridges trying our best not to fall into the river. Finally, we enjoy swinging on some traditional Korean swings before calling it a day. Overall, it was a great experience that we’d recommend to others. 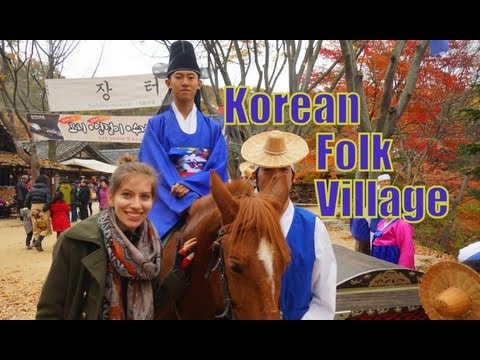