Craving a thick hearty stew, we immediately realized it was time to visit one of Audrey’s favorite restaurants in her neighborhood; this place served up massive portions of Haejangguk, also know as Korean Hangover stew.

If you’ve lived in Korea for a while, it becomes rather obvious that Koreans have all kinds of associations with certain foods and how they pertain to your health. For example, Korean juk porridge is what will be recommended if you have an upset or unsettled stomach; if you’ve you just had surgery or low on the libido factor eating dog meat is recommended; ginseng is the preferred root for those suffering from low energy. Anyhow, it’s not surprising that Haejangguk is a weapon of choice for Koreans who indulge a little too much with adult beverages. After-all, Korea as a nation, is infamous for its high consumption rates of alcohol, particularly soju and beer.

Although we’re not big drinkers ourselves, nor were we hungover on this particular occasion, we certainly enjoy this soup that is often associated with those recovering from a little too much bubbly.

The soup literally translates ‘soup to chase a hangover’ and consists of congealed ox blood, vegetables and cabbage in a thick broth. What many may not realize is that there are various kinds of this soup including those with soy bean paste.

Once we tried a Korean hangover soup in my neighborhood that tasted awful; we couldn’t even finish it. However, the one in Audrey’s neighborhood is one we both really enjoy and frequent often.

In this video, we show you how the meal is prepared, what ingredients are used and all of the accompanying side dishes. I pretend to be hungover (even though I’m not) but my lousy acting skills are likely very unconvincing 😉

Thus, if you’re in Korea, make it a point to try Korean hangover soup if you’ve got a buzz – or even if you don’t 😉 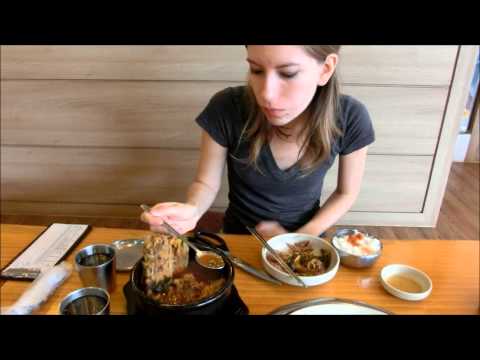