For lunch we headed to a Korean restaurant that specializes in Korean pancakes *aka Korean pizza* (Pajeon 파전 파煎) and fermented Korean rice wine ( Makgeolli 막걸리) which ended up being a delicious feast that we both enjoyed thoroughly.

The restaurant specialized in these types of Korean pancakes along with steamed pork (called Bo Sam).

This exact Korean meal was actually the first Korean food I ever had when I arrived in Seoul many years ago. Even though it’s not western (or Canadian) food it’s become a ‘comfort food’ I reach for whenever I’m craving a filling meal.

We both love the social aspect of this meal where you’re sharing slices of the Korean pizza while toasting and downing the delicious wine.

The Korean pizza itself has a wide assortment of ingredients including copious amounts of seafood and vegetables; quite often including squid and always with scallions (which make up the ‘pa’ sound in the dish).

This is very much a complimentary pairing that is often eaten during raining days or after climbing or hiking a mountain. I’m not sure why this is the case; I have a feeling it’s just one of the many Korean traditions that just is the way it is, in the same sense of the way fruit is peeled in the same way by everyone.

We loved the meal and it ended up being a very good value meal coming in at roughly $13 USD (13,000W) for both the Korean pancake and Korean rice wine. For a large filling Korean style pizza and plenty of wine, it didn’t split our bank account wide open and we left feeling pleasantly full and satisfied.

One way to know if a meal is good or not is to take a glimpse at the plate once you’re finished eating. We didn’t leave so much as a morsel. Obviously, we were very happy customers 🙂 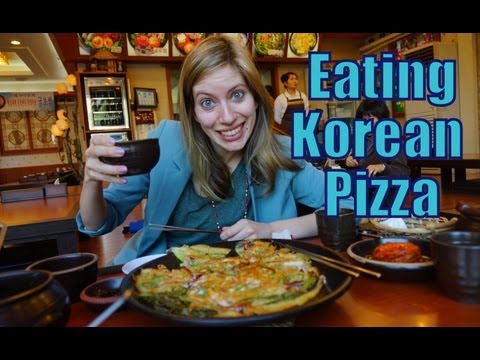