If you have trouble viewing this video click here: http://youtu.be/aa2tQyh89pA

Our latest travel food video is from Montreal, Quebec, Canada where we try eating Montreal smoked meat for lunch at Schwartz’s Restaurant and another location that was less crowded near our Plateau neighborhood.

When travelling to Montreal there are three absolute must try food items: poutine, bagels and smoked meat.

Whereas the debate where to get the best poutine or bagel in Montreal rages on there is little doubt where the best Montreal-style smoked meat is located: Schwart’s

For those unacquainted to Montreal smoked meat (French: du smoked meat, viande fumée), it is a type of kosher-style deli meat made by curing and salting beef brisket with seasoning and spices. The process includes ample time for the flavors to absorb over a week and then moves on to a smoking phases and finally steaming to perfection. What makes Montreal smoked meat different from smoked meats in other parts of the world, has to do with the seasoning of more cracked peppercorns and spices.

Schwartz’s, in operation since 1928, is a landmark institution located on 3895 Saint-Laurent Boulevard. Absolutely packed at all times (during peak hours expect long lineups)

I’m really excited right now. Montreal smoked meat along with things such as Poutine, is something you absolutely have to try when you’re in Montreal. I’m going to go sample a sandwich right now.

Montreal smoked meat is made from brisket and the meat is allowed to cure for one week with peppercorn and lots of other spices. It is really flavorful by the end of that week. I’m going to take a bite over here. Let’s see what this tastes like. Wow, look at all of that meat. Oh my, this is falling apart and it smells great. You can see the mustard as well. Look at that. Oh my, oh my gosh. Keep that sandwich together there.

Okay, I’m going to need a huge napkin after this. Wow. Oh my gosh. That is so tasty. The meat is really juicy and tender. It is served on rye bread with mustard and I just love that combination. Really simple flavors, the meat is smokey and it is great.

Look at that massive piece of meat. The thing is a bohemoth. I can barely keep it together in my hands. It is time for my first bite. It is so tender and delicious. That is one of the best sandwiches I’ve had in a long time.

There is one establishment in Montreal that is really well known for its smoked meat. That is a little deli placed Schwartz’s and it has been around since the 1920’s. However, that is not the only place where you can get smoked meat. There is actually restaurants and little shops across town that serve almost the exact same recipe, so it is not difficult to track it down.

In a place that specializes for Montreal smoked meat, such as Schwartz’s, you can order it lean cut, medium or fatty. We’ve tried a few different ones and medium is our favorite so far.

Some of the popular side orders that you can also get with your smoked meat sandwich include poutine, french fries or pickles.

For a typical smoked meat sandwich in Montreal you are looking at roughly six to eight dollars and it is well worth the price to try. 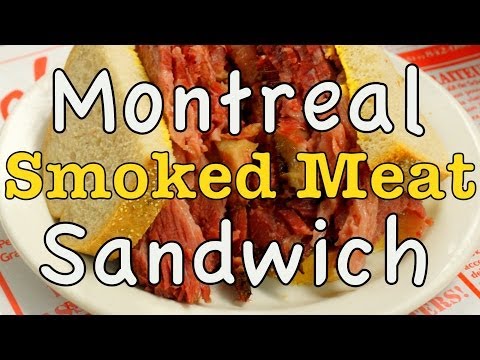