If you have trouble viewing this video click here: http://youtu.be/erWL9qXChIQ

As part of my action plan to embrace winter while in Canada, I decided to head to Montréal, Québec for the weekend to experience a full day adventure of outdoors winter sports and local comfort foods. While wandering around outside I visited Parc Lafontaine, Mount Royal Park (Parc du Mont-Royal) and Parc Jean-Drapeau for Fête des neiges de Montréal.

Although I didn’t have the gear to participate – aside from walking – I witnessed others enjoying ice skating, cross country skiing, tubing, snowshoeing and dog sledding to name just a few. With temperatures (with windchill) dropping down to nearly -30 degrees Celsius, I had to bundle up with my warmest jacket, vest, toque and scarf. What saved me were the frequent stops I made for comfort food. First up, I visited La Banquise for poutine. Secondly, I checked out St-Viateur for Montreal style bagels.

Last, but certainly not least, I gobbled down a delicious smoked meat sandwich from Schwartz’s Deli. Overall, it was the perfect way to spend a full day in Montreal, Quebec during winter months.

I hope my example itinerary will help you plan your trip to Montreal when you’re considering things to do in the city and winter themed attractions worth checking out.

Hey guys, as part of my plan to embrace winter while being back in Canada, I’m in Montreal for the weekend. And this is the view from the guesthouse I’m staying at in the Latin Quarter area. I’m stoked about going outside. I’m going to be doing all kinds of crazy stuff today. Hopefully some dog sledding, snowshoeing and maybe some skating. I’m also going to be devouring poutine and I can’t wait to show you what a cool city Montreal is in the wintertime.

It is seriously cold out today guys. I’m all bundled up but apparently with windchill it is almost minus thirty. Woo hoo!

Check out those icicles. I’m starting to get some on my beard. I don’t know if you can see it or not?

I’m at Parc Lafontaine and there is just this incredible skating rink. Outdoors skating rink. And nobody is out here using it. If only I had my skates. What a fool for me not to bring them. I can’t believe I didn’t bring them.

Oh, this is the best. There is a guy out there with his dog just gliding along the ice with his boots. He doesn’t actually have skates on. Look at him sliding out there. That’s awesome.

I’m in serious need of some comfort food to warm up. It’s time to head over for my morning poutine brunch. Oh, my precious – La Banquise – open twenty four seven for all your poutine needs.

Now comes the hard part. There is such an extensive menu here that I don’t know even know which one to choose.

It is just seriously so nice to be warming up right now. My toes were starting to freeze, my beard as all frosty. This comfort food is going to do wonders for me. I think it is going to allow me to go outside and play around in the snow all day long.

Oh my, the moment I’ve been waiting for. Everything I expected and more. La Banquise has the best poutine in Montreal.

Woah, that seriously did not last long – pure gluttony over here.

So this is one of the more unique entrances I’ve ever seen towards a subway station.

Mickey Mouse is in the house.

Hey guys, my life would not be complete without a Montreal bagel.

Okay, now the million dollar question is should I go for a bagel sandwich or just go with spread on a bagel? Decisions, decisions.

So it appears we’ve got some snow cricket going on over hear. It doesn’t get too much more Canadian than this.

Alright, it is time to complete the trifecta of must have foods when you’re in Montreal. I’m going for – of course – a smoked meat sandwich.

And when you want the best you come to Schwartz’s. Seriously it pays to come here in the winter. The is the first time I’ve ever been here where there hasn’t been a massive lineup.

Now that really hit the spot. One thing to keep in mind when eating at these popular restaurants in MontrÃ©al is that some of them are cash only. You can only pay with cash. Some allow debit card but very few take credit card.

Now it is time to burn some calories guys. It is kind of embarrassing thing for me to admit is that I consumed most of those calories within a two hour period.

I’m at Mount Royal Park right now and there are all kinds of people doing totally different types of exercises from snowshoeing to cross country skiing to skating.

So this is the reward for the long climb up Mount Royal. I’m near the top of the peak here and there is going to be some spectacular views. I just know it.

And the last stop of the day is at Fête des neiges de Montréal. 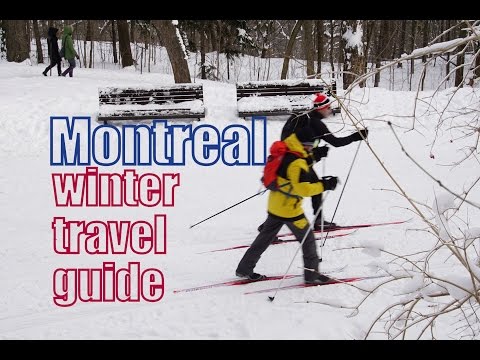