After visiting the traditional Namdaemun market we quickly turned our attention to nearby Myeongdong which is one of the most popular shopping districts on the North side of Seoul.  Only just a short walk from one another it’s quite fascinating going from such a traditional Korean market to one that is very modern and trendy.  Typically, the area is frequented mostly by young Korean adults but it is also very popular with tourists and expat foreigners.  It’s the kind of place trendy young Koreans go for people watching, street food and fine dining.

One of the main draws, aside from shopping are the various cultural performances that often take place. We were treated to a Nanta theater performance that showcased a talented group performing culinary theatrics.  With expert precision the performers wielded their knives in a very skillful manner dicing, slicing and chopping anything that was on the table.  I loved how animated all them looked performing their routines with such charisma and smiles plastered on their faces.

After being mesmerized by the free performance we then wandered around looking for shoes and boots.  I was lucky enough to find a pair of red running shoes that were literally the nicest pair I’ve ever owned; thanks to Audrey for buying me such a nice early birthday present.  Feeling tired from our activities for the day, one of the highlights was sharing a giant ice cream soft serve cone. It was the biggest one either of us had ever tried. Other highlights included sampling more street food and jostling with the crowds. This video is from our Life in Korea series. 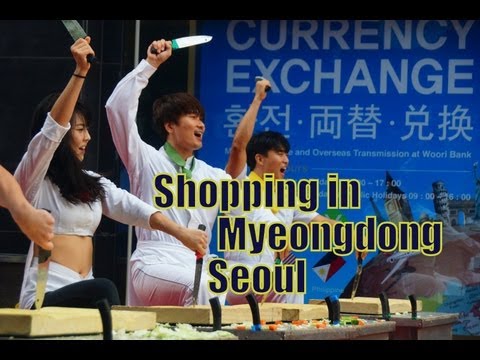