If you have trouble viewing this video click here: http://youtu.be/wRWdNzuSLck

Bagels are one of the most common types of breakfast item anywhere I’ve traveled around the world. However, when it comes to quality New York-style bagels and Montreal-style bagels reign supreme. Come find out what makes a New York style bagel unique as we munch away on a plethora of different varieties.

So hello from New York City. Sam and I are hanging out in Queens for a few days and we’re just going to be visiting friends, checking out some sights and mostly eating. So today’s video is actually going to be a taste test. We tracked down some of the best New York Style bagels in the city and today we’re going to be sampling a whole bunch. This large bag over here holds 14 different kinds of bagels. So Sam, I hope you’re feeling hungry.

Alright, I kind of went overboard with my purchase. But I’m going to show you all of the bagels. One by one.

And there is a whole bunch more. And if get bored I can always use this bag to exercise. It is seriously heavy.

So last summer we traveled to Montreal where we tried a whole bunch of bagels. So what is the difference between Montreal bagels and New York bagels? Well apparently the Montreal ones are smaller, thicker and sweeter whereas the New York City bagels are larger and doughier. So let’s start eating them.

The first thing that comes to mind when I try a New York style bagel is just how massive these are. Like these are huge. Like check out this thing. It is like holding a brick. If someone ever stole my wallet I could throw one of these at them. Wham, right in the head. That would knock them right out.

But instead of throwing them at somebody I think we’ll try eating them right now.

So I’ve had my eye on this one for a while. This is the everything bagel. And it smells amazing. I think there has to be some garlic like in there because the aroma it is giving off is just wonderful. So I’m not even going to bother putting cream cheese or any kind of spreads on it. I’m just taking a big bite. Dig right in.

Hmmm. Well, it really is doughy and chewy. Look at that. Oh yeah. So that is poppy seed and roasted garlic on the exterior and sesame seed. That is just wonderful. Like you can eat it plain. It is flavorful as it is. Amazing. I know this the first one I’m trying but I think it is my favorite.

Alright, I’m going to be focusing on more of the sweeter bagels. This one here is the french toast bagel. And I’ve decided to pair this with one of the cream cheeses that we bought. This is raisin and walnut cream cheese.

Okay, I’m totally being lazy as well. I’m not cutting open the bagels. I’m just putting a bit of the spread on. Time to bite. Mmm. Wow.

Yeah, like seriously you couldn’t find a better spread for this particular bagel. Like they compliment each other perfectly. This is a bit of a sweeter bagel and it is just amazing.

Okay, so next up we have the egg bagel which is the size of my face. Let’s be honest here. Um, again I’m going to try this one without cream cheese. I think that might be the biggest one. Yeah. The biggest one of the bunch.

My bite was too big. Hahahaha.

Well, greedy pants, how was that?

Alright, so. That is the egg bagel. It is yellow. A huh.

Um, I thought it would be a little fluffier than the other ones. Kind of like egg bread. But it is really not. It is still quite dense.

It is nice. I think this one would be nice with like salty butter.

Alright, and next up I’ve got one of my favorite bagels of all time the cinnamon raisin bagel. And not much needs to be explained about this one. Let’s just bite right in.

That’s really good. My personal tip for when having this particular bagel is to toast it and then put peanut butter on. That is an amazing combo.

And the last one here is pumpernickel and it smells fantastic. If you like German bread you’re going to like this one.

Again the bite was a little too big. Now I can’t speak.

This bagel. This would be perfect with cream cheese and some smoked salmon on top.

Alright, and the last one for me here is the blueberry bagel. And if you look closely here it definitely is purple. Um, I’ve never tired a blueberry bagel before. I love blueberries so this should be exciting.

Oh yeah, look at that. You can taste the blueberry. Um, it is not overpowering like you still have like the normal bagel taste but it is just like that extra little blueberry flavor.

It is really good.

Seriously, those bagels were fantastic. We’re both really getting stuffed at this point. If you want to buy them you can go to New York City Bagel and Coffee House which is located in Queens Astoria. 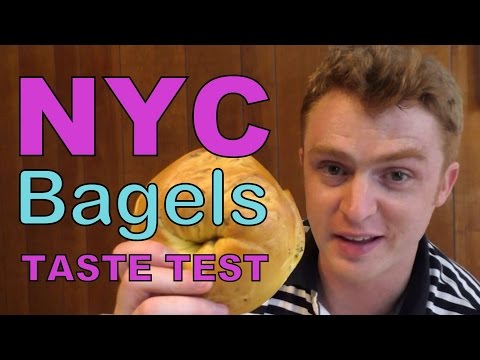