Every so often, Audrey and I, muster up enough courage to try something we’d normally never do on our own.  When we had the opportunity to try Ocean Jet boating on the Gold Coast, Queensland, Australia we had serious reservations.  However, I’m a strong believer in forcing yourself to get out of your comfort zone from time to time.  It helps you grow as a person and more importantly it shows you that things that you thought were previously off-limits are accessible with the right mindset.  Thus, with a plucky positive attitude we decided to give it a go.  The following adventure travel video is our personal experience.

So they say you should do at least one thing that scares you every day. For me it is going to be riding the Ocean Jet. I am terrified. This is supposed to be like the roller coaster of the sea but we’re heading on it today.

After buckling up we began our Turbo Jet adventure. This 880 horsepower vessel ripped through the water like a speeding race car.

We headed out into the ocean and when our skipper gave us the signal it indicated that he was going to do a 360 degree power turn.

We ended up using all of our courage points for the day with every sudden jolt.

It is a like a roller-coaster out on the sea.

It was a white knuckle adventure. A total adrenaline rush. The best part was when they were doing the 360’s. Oh, that was crazy. 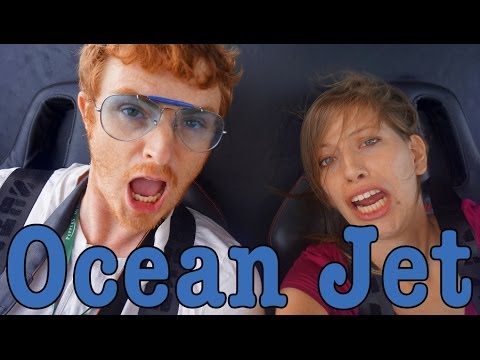