Arriving at Frankfurt International Airport we faced a bit of dilemma. With close to eight hours to kill before our flight from Frankfurt to Brisbane via Abu Dhabi and Singapore, we had to decide between hanging out at the airport and getting online work done or going into the city for a quick whirlwind tour.

It wasn’t long before we made the decision to head into town. Frankfurt, known locally as Frankfurt am Main, is the business and financial centre of Germany; however, I hadn’t heard of many people visiting this city as opposed to using it as a mere transportation hub to get to more popular tourists destinations such as Berlin, Heidelberg or Hamburg.

With very few preconceived exceptions we immediately started to be won over by the charm of the city center as we ventured past the futuristic avant-garde skyscrapers to Römer square.

We couldn’t help but notice the contrast of wealthy businessmen scurrying about in relation to relaxed hipster hangouts along the River Main.

Getting outside of the financial hub of the city allowed us to experience a quieter pace of life where many well maintained older buildings displaced futuristic modern ones.

One of our favorite experiences was visiting many of the green escapes where the hustle and bustle gave way to ponds, nature trails and geese.

Overall, it was the perfect way to spend the afternoon as opposed to being cooped up in the airport waiting hours on end for our flight.

This is a bit of a surprise. We have an eight hour wait for a flight in Frankfurt, so instead of just hanging around in the airport, which was our original plan, we decided to drop our bags off and come into the city.

That pretty much wraps up our little visit to Frankfurt. We spent maybe three or four hours just walking around and it was really nice to just see the city without much of an agenda.

I came here with quite low expectations to be perfectly honest. I had heard more or less this is just a financial hub but it ended up being quite charming here in Frankfurt and I’m definitely going to miss Germany. I’ve had a wonderful time traveling around the country. 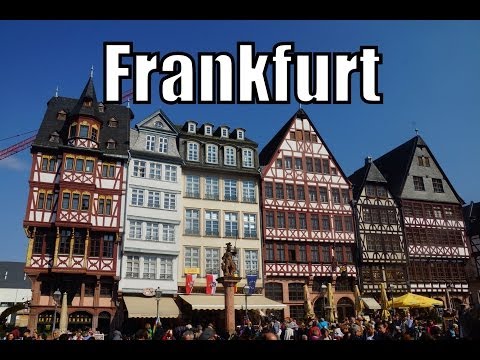