If you have trouble viewing this video click here: http://youtu.be/uCx09mnVpHA

Our third stop on our Busabout adventure across Europe was in Amsterdam. We had only previously been in the city in transit flying back home to Canada so we were eager to explore. We explored its canals by paddle boat, picnicked nearby museums and wandered around by night. Come find out what Amsterdam is all about.

After leaving Bruges behind, we drove on to Amsterdam, a city known for its bikes, canals, and tolerance for alternative lifestyles. We had been to the city before, but only in passing, so we were excited to get a deeper look at it this time around.

So we are on a boat, on a canal and that can only mean one thing – we’ve arrived in Amsterdam! And this is our third destination on our tour with Busabout. So today we’re just spending the day in the city exploring. We thought we should hit the canals first and then maybe we’ll wander around on foot.

Hiring a paddle boat was the easy part, but then the challenge was to navigate the canals with a map while ensuring we didn’t get in the way of the bigger boats. There may have been a few minor bumps and scrapes along the way, but we eventually figured it out.

We survived the paddle boats. Now we’re just hanging out at the park soaking in the sunshine.

Museumplein gets its name because it’s a large green space surrounded by 3 different museums. If the sun is out, you can bet that people are going to be picnicking, napping, or tanning on the lawn. After a long day of walking, we enjoyed a little siesta on the grass, and of course, we too had to pose with the “I amsterdam” sign even if we got a little lost in the crowd.

It was then time to familiarize ourselves with Dutch treats. First up we tried hagelslag, which is made by taking a slice of bread, spreading butter on it, and pouring chocolate sprinkles. It tastes just like cake with icing.

We also tried stroopwafel, which is a thin waffle glued together with a caramel-like filling. It’s so good especially if you let it sit and melt on top of a hot beverage.

In Amsterdam we also learned that the bicycle stereotype is completely true. There are more bikes than people, and more bikers than drivers. This is a city where you want to look both ways for vehicles and zooming bikes before you dare set foot off the sidewalk.

So we’ve shown you Amsterdam by day. Now it is time to go and explore the city by night and ‘no’ we are not going to the red light district because there is more to Amsterdam than that.

We made our way to Leidseplein, which is a busy square lined with bars, restaurants, and the fast-food phenomenon that is FEBO, where you put in a few Euros and get hot food out of a vending machine.

So sadly our time in Amsterdam has come to an end. Our next stop is Berlin so now we’re off to catch our Busabout bus. Let’s get going. 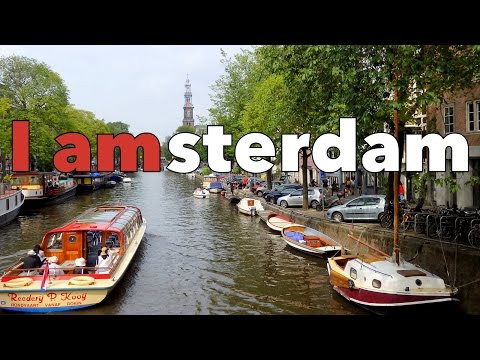