If you have trouble viewing this video click here: http://youtu.be/sl0Fwjrzrdk

It is time for another epic Spanish food battle. For this highly contested match we have in one corner Paella and in the other corner Fideuà. Without spoiling too much Paella is considered the National Dish of Spain originating from Valencia. Come find out what makes these two dishes so irresistible as we taste test them both in Madrid, Spain.

So it is dinner time in Madrid and today we are here at a local restaurant where we’re going to be trying two different dishes. We are planning to eat Paella and something called Fideuà. They are two dishes from the region of Valencia. And there are some similarities and some differences between the two so we’ll be showing you those as soon as the plates arrive.

The food has arrived. Yes, some I’m going introduce mine first. I am having the Fideua, which is kind of like a noodle Paella, and it is made with Vermicelli noodles which are super thin and mine has mussels, prawns and squid as well as artichoke hearts so let’s take a big bite of this.

That is really nice.

You can really taste the seafood. It is super flavorful. And I also like that the noodles are a little bit overcooked. Like they are nice and soggy, which is how I like them. So I’m quite happy with my meal so far.

Okay, so your mixed Paella has arrived. Tell us about it. Yeah, the Paella is finally here. So the mixed Paella has a whole bunch of different things. Let’s take a look down at it. So you can see that there is chicken, we’ve got shrimp, we’ve got other kinds of seafood, we’ve got peas and it has got kind of a looks like to be a yellow type of curry sauce. Nice.

This is my favorite Spanish food. The thing I like about it so much is that you have all of these different ingredients and it just has such a flavorful sauce on top of the rice. It is just so good.

So if Sam were to try the traditional Paella from Valencia that one would actually have chicken and rabbit because that is what the original recipe calls for. But we’re not really used to eating rabbit so that is why we went with the mixed one that has chicken, some seafood and chorizo.

So quite a few restaurants in Madrid, and all throughout Spain have Paella on the menu, but the ones that really specialize in it have a special kind of pan. Some come take a look here. And you can see that it is made right in it and brought to your table. And they have the wooden guards on the end that basically probably protect you from getting burnt. Exactly.

Well, we certainly polished that off. So now let’s talk about the price. Yeah, that was nice and filling. So in terms of price it can vary widely. In more expensive kind of like gourmet restaurants that really specialize in it we’ve seen it go up to thirty or thirty five Euros. We’ve never actually ate somewhere like that. The place we went to was eleven Euros. And we thought it was a really good value. We’re both really full now. And I’ve also seen it as an appetizer in some smaller types of restaurants and you can expect maybe to pay seven or eight Euros for that. 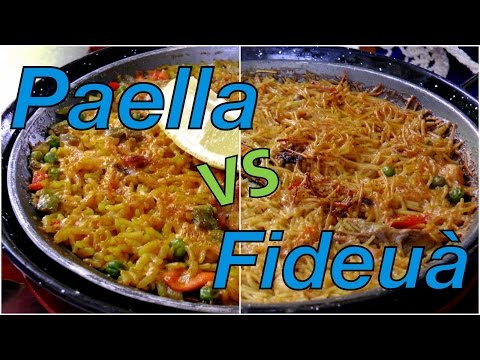