This is a travel video of a group of us playing pond ice hockey at an outdoor rink in Fredericton, New Brunswick, Canada.

Having the opportunity to come back home and play ice hockey literally gave me goose-bumps.  I grew up playing hockey and not long after learning how to walk I had a pair of skates on my feet.  Skating, for me, feels like walking; while, I’ve been based in Asia as an ESL teacher and digital nomad, I haven’t had the opportunity to skate on ice, although in some situations I’ve been able to go rollerblading.

Regardless, it’s been ages since I’ve been able to put on my skates, grab a hockey stick and slap a puck around on the ice; it felt like I was reliving my childhood all over again.

Canadians are mad about hockey and I’m no exception.  It’s almost like a religion here.  It shares the same level of appeal as football in many Latin and European nations.

Whenever I come back home to Canada I like to hit the ice and play hockey with family friends.  I was fortunate enough to skate on the ice with my father and a close family friend.  I”ve previously spent many years skating with my father who coached most of the hockey teams I played on as a youth.  In a sense, it was like rolling back the clock and we both relished the moment being able to skate together as father and son.

n this video you’ll notice us skating, passing and stick handling on the large open ice surface of what is a converted tennis court in the summer months. 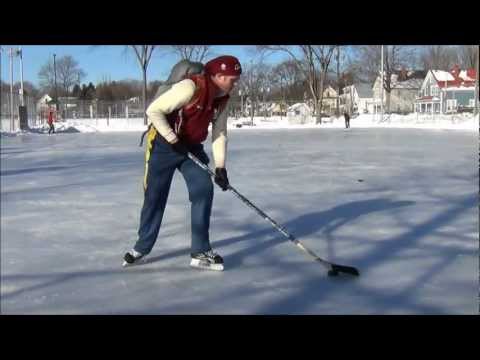