In this video Sam and Audrey visit a traditional Korean porridge restaurant to fight off their colds. In this video we try Hobakjuk (호박죽), which is a porridge made of pumpkin and glutinous rice. Korean Juk (죽) is considered a staple “get well” dish, which is eaten when one is sick or recovering from bad health.  All over Korea there is a chain of these ‘well being’ food restaurants called Bon Juk.  It’s such a popular chain that you’ll find just as many of these as you would Starbucks or Lotteria.  Like in many other parts of the world, the terms ‘well being’ and ‘slow food’ are being promoted to help combat fast food addiction.  The dish itself takes time to prepare and is the kind of meal that is best to have with a friend given how large the portions tend to be in general. Like all Korean meals, this one too came along with a few little side dishes including Korea kimchi and soup. The porridge was sweeter than I anticipated, but it was a very tasty and heartwarming meal to enjoy on a cool autumn day.  A few other types of Korean porridge I highly recommend include variations using walnuts and purple sweet yams.  For those suffering from an upset stomach it’s the perfect food to try considering it is so easy to digest.  Apparently, Korean juk is also quite common in other Asian countries where it’s known as another name; it’s also popular as a baby food.  For those traveling or living in Korea, I highly recommend trying this dish – whether you’re sick or not – given its lethal combination of being tasty and extremely healthy. 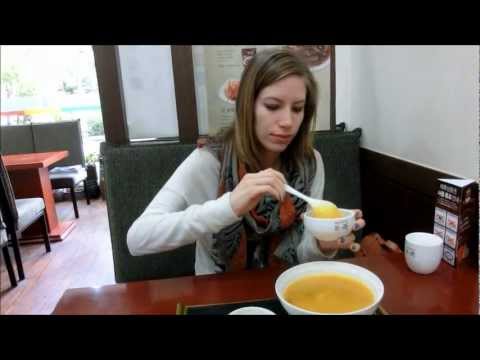