In our most recent travel video we hop on a rickshaw and receive a guided city tour of historic George Town, Penang, Malaysia.

Although we had talked about taking a rickshaw tour of the city previously, it was a spur of the moment decision when we flagged down a colourful rickshaw heading down Chulia street after our Chinese feast at Tek Sen restaurant.

Immediately, I had a favourable impression of our Malaysian rickshaw driver who was personable, charming and easy going. Instead of wasting time haggling over the price of our ride, he quoted us a fare that was within the price range we expected to pay given our initial research.

Within moments he was pedalling us down the hectic main streets and quieter back-alleys in the heart of Georgetown. With infectious enthusiasm, he spurred off random facts about each area we visited along with taking delight in pointing out significant landmarks.

With a raspy deliberate voice he sounded a lot like a sage elder or even a bit like Yoda: “This building is very Ooooollllddddd. Verrrrryyyy Oooooollllldddddd.”

At one point we passed a teenage boy riding his bicycle. Noticing that we were taking photos he kept turning his head backwards eagerly interested in what we were doing. Finally, he circled back towards us waving at us while passing us in the opposite direction. Several seconds later I felt a tug on my right wrist; the boy playfully tried to snatch my camcorder straight out of my hand. As he pedalled forcefully ahead he turned around and beamed a radiant smile. We honestly weren’t sure what to make of his failed attempt to snatch our camera. On the one hand, it may have just been a joke; on the other, had he actually taken it we surely wouldn’t have been laughing.

As we entered Little India district, it was like I was suddenly being catapulted back in time to my days roaming around India. Women wearing Brightly colored saris, men flipping chapatis on greased pans and loud thumping music filled the streets.

In hindsight, one of the most humorous moments occurred when we got splashed by a wave riding along the North Channel. Everything, from head to toe, including our clothes and cameras was covered in water. Immediately, we tried our best to dry our cameras with sections of our shirts that weren’t totally soaked. Fortunately for us everything was just fine – including our cameras 😉

Overall, taking this rickshaw tour was one of the highlights of visiting Penang again for our Visa run. When compared to the rickshaw ride in Malacca, we certainly preferred our adventure in George Town. For those interested in doing the same, walk down to Jin Penang (Penang Road) where you’ll easily spot a plethora of rickshaws and drivers. Expect to pay somewhere between 30 to 40 Ringgit for a one hour drive.

Have any of you taken a cycle rickshaw ride before? Would you like to? How was your experience? 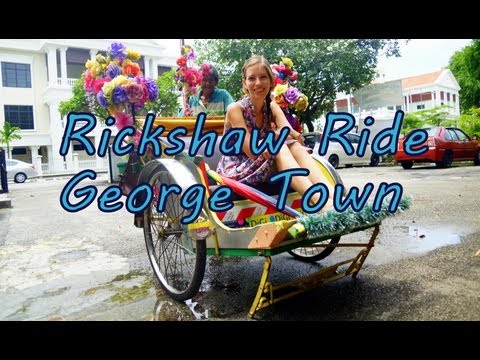