In our latest travel video we board a train from Saigon (Ho Chi Minh City) en route to Nha Trang marking our first train ride in Vietnam. Naturally, given our passion for train travel over all other modes of transportation, we were on edge with excitement.

At first we were quite confused which cart to board given that numerous carts had the same number as ours. In Vietnam, there are a number of carriages reserved for private companies, such as ET Pumpkin and Eastern Oriental, which added to our confusion.

Even the ticket attendant had us shuffling around from cart to cart until we finally settled on the proper one and sat down at our seats. The train was packed and aside from a European couple seated next to us were the only foreigners on board. One thing we instantly noticed was that the trains weren’t maintained as well as some of the others we’ve been on in Asia. Our seat cushion was frayed and the reclining option was broken. Regardless, we were still thrilled to be taking a train trip as opposed to being on a bus.

The journey itself was one of the most scenic I’ve been on in a long time.

The diversity in landscapes was quite impressive as we passed through regions that were covered by lush jungle, farmland, arid desert, flat and mountainous terrain. At times, I would get out of my seat and head outside of my carriage so that I could just feel the wind blowing in my face as I captured footage with my camcorder and just spent moments enjoying it with my naked eyes.

We loaded up on some local snacks at a small bakery in Saigon; however, we found ourselves eating plenty of Vietnamese options served on the train. Vietnamese Attendants pushing carts of various snacks and coffee were a frequent occurrence throughout our journey.

One of our favorite snacks in Vietnam is iced coffee and spring rolls. The process of serving the iced coffee was rather fascinating as condensed milk was first poured into the cup followed by coffee/sugar and finally crushed ice. It’s a far more meticulous process than I ever imagined; I must say I have lot more respect for the process of preparing an iced coffee in Vietnam.

Overall the journey took 7 hours to complete; however, we didn’t find it nearly that long as we spent a good bulk of the journey nodding off. 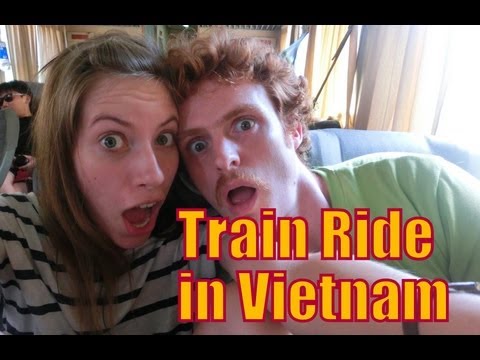