Never shying away from trying new exotic delights in Finland, we grabbed a package of Finnish Salmiakki, known as black salty licorice, to sample in a ‘fear factor’ type of taste test: many foreigners have spat it out on the first try.

Salty liquorice, known in Finnish as Salmiakki or Salmiak, is a type of liquorice flavored with ammonium chloride.

It’s one of the most common candy snacks in Nordic countries; however, it’s most popular in Finland.

It has such an overpowering taste that it has been referred to by some as tongue numbing.

With this in mind we both sat down to taste this exotic Finnish delight.

I’ve grown up in a family that adores liquorice. Late night ‘treats’ often consisted of either a bowl of popcorn with Parmesan cheese of a package of nibs or black licorice.

Knowing that I loved ‘sweet’ American style licorice, I sat down with an open mind convinced I’d learn to love this Finnish salty counterpart.

As I popped my first piece into my mouth, the astringent taste overwhelmed my taste buds. I had never tasted anything quite like this before in my life; in fact, I couldn’t think of a single other food item I’ve ever tried before that quite compared to what was now jammed in my mouth.

Should I swallow or spit it out?

The answer was obvious: swallow.

I instantly fell in love with Salmiakki; instead, of just popping one into my mouth I grabbed a handful. Within just an hour I had devoured the entire bag.

Audrey, on the other hand, had an entirely different experience.

Not a fan of licorice in any way, the results were rather predictable; as soon as she popped it into her mouth she spat it out immediately: “Yuck! This is disgusting. How could you possibly eat that?” she murmured.

I wish I had my camera in my hand (as opposed to filming with a camcorder) to capture the moment.

“It’s amazing!” I said with absolute conviction: “It’s wonderful that you don’t like it. That means I get to eat it all!”

For those seeking to try Salmiakki – while traveling in Finland – have options galore. Although most popular as bite sized candy, Salmiakki is now found in other products such as ice cream, alcoholic beverages, cola drinks, vodka, chocolate and even meat.

My favorite brand of Salmiakki happened to be Fazer. Fazer, known more for its creamy chocolate bars, was a brand I quickly associated with comfort food. I ended polishing off several king sized bars of Fazer chocolate and family sized bags of Salmiakki before my time in Finland had expired. I suppose that’s my excuse for my ever expanding blogger belly 😉

In neighboring countries it is known by different names:

The question of the day: Would you try this Finnish candy? Do you like salty food? Are you open to trying new foods abroad or do you prefer to stick to familiar favorites? I would love to encourage you to try it and document your experience on camera. Will you swallow or spit it out? That’s the million dollar question of the day 😉 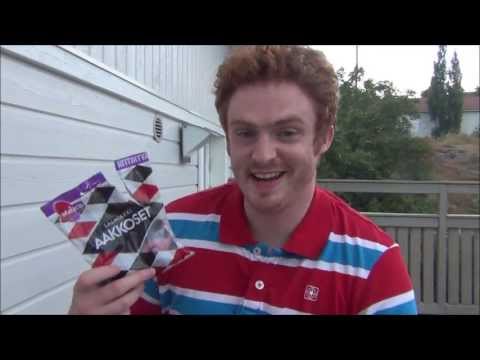