In our latest travel video we try eating Scottish snacks and Scottish junk food while sampling some Scottish drinks and beverages in Edinburgh, Scotland.

In terms of my personal favorites I loved the Whisky tablet and ginger beer. Audrey, on the other hand, enjoyed the shortbread cookies the most.

As far as what we didn’t like, Irn Bru wasn’t a hit. I especially didn’t like it because it reminded me too much of cream soda – a drink I don’t enjoy. Audrey didn’t enjoy the tablet in particular, which she thought tasted like cheese.

What kinds of Scottish foods have you tried? We’d like to make another video and any kind of recommendations would be appreciated.

So this afternoon we are going to be doing a little bit of a taste test. So we’ve raided a Scottish supermarket and picked out some items that we thought looked very local. So we’re going to try those and see what they’re like. Yeah, overall we’ve got five different things. Two beverages and three things to eat.
So first up I’m going to be trying something called Irn Bru and apparently after Whisky this is Scotland’s second national drink and it looks like a regular fizzy drink. It kind of looks like it could be orange flavored but I hear it’s just sweet and doesn’t really taste like fruit. Oh, I’m going to need help opening this. Hahahaha
Rawwwr. Thank you kindly.
So it smells very sweet and sugary. It doesn’t smell like orange.
Hahaha.
It’s a bit like cream soda maybe. It’s just really really sweet. Like sweeter than Pepsi or 7Up. Oh yeah?
Yeah, it reminds me a lot of cream soda as well. Which isn’t my favorite beverage, so overall I don’t think I’m going to be an Irn Bru man anytime soon.

Next up we’ve got Mackie’s of Scotland’s Haggis and cracked black pepper flavored chips or crisps as they like to call them here. Right, exactly. Chips here would be referring to like french fries, so we’re going to call these crisps. Let’s open it up here. It’s going to be like Kettle style chips. Crisps, I mean. Kettle style crisps. Let’s try this. You can tell that has a smokey flavor.

Can you taste the Haggis? Ummmm, yeah, kind of but I mean it has more of a an all dressed smokey flavor in my opinion. I do like them.
Why won’t you be trying any of those delectable crisps? Well, I got really sick shortly after eating Haggis, so just the name, just the sound of Haggis kind of makes my stomach turn a little bit, so I’m staying away from haggis flavored chips this time around, which is good for me because I get to eat them all. I like them. Good.

And what do we have here? Next up we have Crabbie’s. Here in the back it says that it is best served chilled with ice and lemon but we have neither of those. Room temperature? And actually we don’t even know if this is Scottish or not but I think so. Let’s assume. It says following in the pioneering footsteps of the first Scots. Well, there we go. And what is it? I think it’s a Ginger beer isn’t it? Ginger beer, okay. With alcohol.

Hmmmmm, what does that mean? Ginger beer. Hahahaha. That’s exactly what is is. It tastes very gingery? Yes, I don’t love beer, so I’m not going to say I love it but it’s a nice smell. It smells like ginger tea. Tell me how you like it?
Oh yeah, I like that a lot. It’s got a very. It’s quite sweet. I mean normally beer doesn’t have this sweet of a taste, so this is a nice refreshing beverage. Refreshing at room temperature. True.

And we’ve got Butterscotch chocolate. Let’s give it a go.
Hahaha, that’s upside down but that’s okay. Let’s try a piece of this. Mmmmmm. Oh wow! Oh yeah, you really taste the butterscotch. It’s creamy and sweet and delicious.
Is this milk chocolate or is it dark bitter chocolate? No, it’s really sweet. You’ll love it. It kind of reminds me of Dulce de Leche. Dulce de Leche chocolate huh? Like it then? Yeah. I do like it. I mean normally organic chocolate isn’t that great in my opinion because it’s a little bitter. A bit too natural for me. But this is quite nice. She takes another bite. Nice and sweet. It’s creamy.

Shortbread cookies. This is Christmas in a tin. Mmmm, smells like Christmas? Oooooh, those look good. I can tell I’m going to like this. Nice big thick cookies. Crispy? Not crispy. Just crunchy Christmas cookies, you know? Mmmmmm. Going to share those? Maybe. You know this would make a really souvenir people. If you’re visiting Scotland get Scottish shortbread.

Those are real good. It reminds me of my Mom’s shortbread cookies. She used to make for me for Christmas and I would eat a lot of those.
And last but not least we have tablet, which is a sweet treat that everyone has been talking about. And this is what I’m most looking forward to having. This is supposed to be very much like fudge and so I can’t wait to try it. This one is whisky flavored. Mmmmm….mmmm. Oh yeah!
So I’m just going to go at this like it’s a chocolate bar. Just bite right in. Smells good. Oh, wow. That is really really really sweet. Is it soft, crunchy, gooey, chewy? It’s a little. I wouldn’t call it crunch. It kind of crumbles in your mouth and yeah I can taste a hint of the whisky. I mean it’s not overpowering. It’s more sweet than anything else but there is definitely a hint of whisky.

It smells like cheese. Take a bite. That’s the smallest nibble ever. Okay, it’s sweet when you taste it but it smells like cheese. I’m not kidding. Is that the whisky smell? Could be yeah. Do you like the taste though? Yes. Even though I’m just nibbling at it. I’m like grazing it with my teeth. It does taste nice. Very sweet. The smell? Mmmmm-ooooh. The smell doesn’t do it for you? It gets a nay from me.

Okay, so favorites. What was the best thing you ate? I really liked the tablet and the ginger beer the most. Why? Well, I just love to eat fudge and I like to drink beer – especially anything with ginger in it. Gingery beers….mmmmm.

Okay, so my favorite I would say was the shortbread cookies. Those were really nice. It reminds me of Christmas and least favorite I’d have to say the tablet just because it smelled really bad. I’m sure regular tablet is great but the Whisky flavored one I’m telling you it smells like cheese. Like go buy a pack and sniff that and come back to me. And I think the thing we both didn’t like was the Irn Bru. Yeah, it’s a bit too sweet but not terrible. I didn’t like it at all. That was my least favorite by far. Anyways, so yeah when you come to Scotland try out these products and try out other things and let us know what you think. And if you have any suggestions of things that we should try while we’re here in Edinburgh just leave it in the comments below. I think tomorrow we’re going to be hunting for some deep-fried pizza. Number one goal. Yeah, we just had the deep-fried chocolate bars today so. Okay, tootles. Bye. 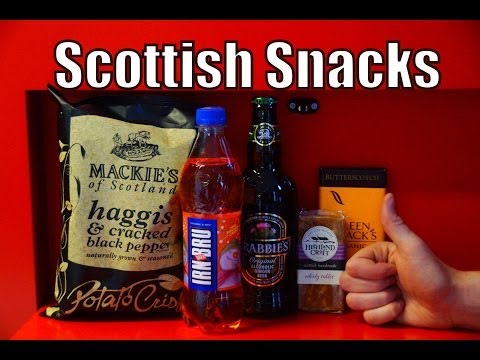